Industry accounted for about 65 % of primary energy consumption in China, led by such industries as metal production, mineral processing and chemicals. Industry’s share of energy consumption, however, has fallen a bit over the past decade as households (13 % share) and the transport sector (10 %) have rapidly increased their energy consumption.

Coal remains China’s main source of energy, covering almost 60 % of the country’s primary energy needs. China uses as much coal as all other countries in the world combined. China’s coal dependence also makes it the world’s largest generator of greenhouse gasses. Coal use continues to grow and new coal-fired power plants are continually being planned and brought on stream. Nevertheless, coal’s proportional contribution as an energy source has shrunk over the past decade. China has aggressively adopted several forms of renewable energy, and increased its use of gas and nuclear power. China is the global leader in generation of hydro, wind and solar power, accounting about 30 % of global power generation in each category.

Coal is an integral part of China’s energy palette because it has major coal deposits. However, even if China is by far the world’s biggest coal producer, it is no longer self-sufficient in coal. Over the past decade, China has had to import more and more coal from abroad, making it today the world’s top coal importer. Nearly all coal is imported from Australia, Indonesia, Russia or Mongolia.

Oil is China's second-most important energy source. China’s domestic oil production has been declining since 2015, and today is only sufficient to cover about 30 % of its needs. Oil imports have grown steadily at around 10 % a year. China has diversified its oil supply quite efficiently. Last year, it purchased crude oil from more than 40 countries. The biggest suppliers were Saudi Arabia (providing 17 % of China’s oil imports), Russia (15 %), Iraq (10 %), Angola (9 %) and Brazil (8 %).

China has increased the use of natural gas rather quickly. Domestic production has doubled over the past ten years, making China today the world’s sixth largest natural gas producer. Natural gas imports have also risen substantially. Gas now flows into the country via pipelines from Central Asia, Myanmar and (since December 2019) from Russia. After Japan, China is the world’s number-two buyer of liquefied natural gas (LNG). About half of China’s LNG comes from Australia.

The world’s top energy consuming countries in 2018, %-share of each sources’ global consumption 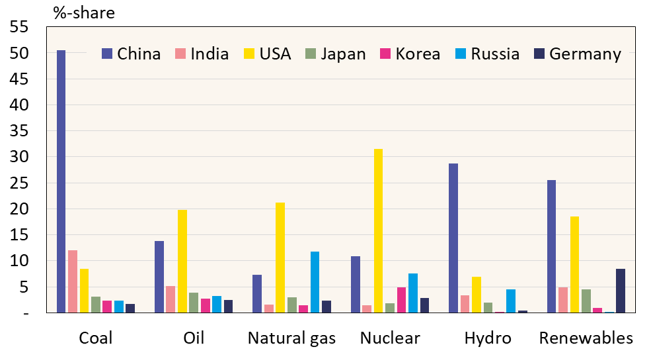