As many analysts expected, Russian GDP growth slowed last year. In the first nine months of 2019, GDP rose by just 1.1 % y-o-y. Growth for all of 2019 is expected to have also remained close to 1 %.

Economic growth, especially in the first half, was supported by industrial output, which grew at over 2 % y-o-y in January-November. Industrial output growth lost steam in November, largely on a slowdown in manufacturing. Preliminary GDP figures and various corporate surveys suggest that much of the growth in industrial output last year reflected companies building up their inventories in anticipation of demand that never materialised, due e.g. to lower-than-expected growth in public sector spending.

On a brighter note, growth in retail sales recovered towards the end of the year to around 2 % y-o-y, as real household incomes finally began to show positive gains again. Rosstat’s revised figures for January-September show that real household incomes increased by 0.8 % y-o-y. Growth in household incomes was mainly supported by rapid wage growth and a favourable job market. At the end of 2019, Russia’s unemployment rate continued to hold at historically low levels of around 4.5 %.

Preliminary figures show the drop in inflation to 3 % p.a. at the end of 2019 also helped support household purchasing power. While the hike in the value-added tax at the beginning of 2019 initially drove up consumer prices, ruble appreciation, favourable harvests and modest demand growth offset much of the inflationary effect from the VAT increase.

Moreover, largely thanks to good harvests, agricultural output grew by 4 % y-o-y in January-November. The construction and transport sectors showed practically no growth, however, and thus added nothing to economic growth.

Forward-looking indicators suggest that Russian economic growth will remain sluggish in the months ahead. Growth should begin to pick up gradually over the course of 2020, mainly on increased public sector spending. Exports should also revive slightly after last year’s weaker development. The current BOFIT forecast sees Russian GDP growing by 1.7 % this year, a level well in line with the consensus range of 1.5–2 %. As usual, a decline in oil prices constitutes a key risk to Russia’s short-term economic prospects. The economic strengths for the Russian economy moving forward are its set-aside funds from oil & gas earnings and the government’s relatively low level of indebtedness. 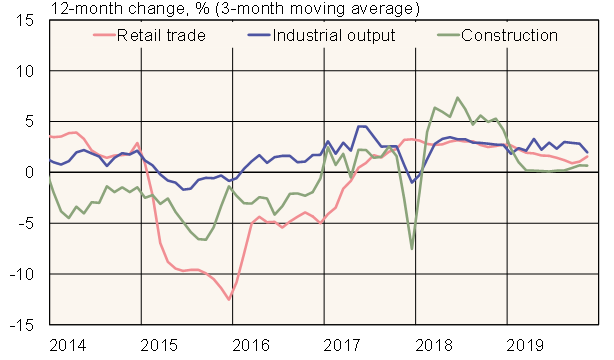