Following strong growth in the early autumn, growth of China’s foreign trade slowed significantly already in November. In December, the value of goods exports measured in dollars was down 5 % y-o-y, while imports declined by nearly 8 % y-o-y. The value of exports for all of 2018, however, was still up by 10 % and the value of imports up 16 % from 2017. The goods trade surplus fell from about 420 billion dollars in 2017 to around 352 billion dollars last year.

The sharp slowdown in import growth reflects both the general slowing of the Chinese economy and global developments. While December commodity prices were slightly lower on average than in December 2017, most of the fall in imports stemmed from other causes as imports from the US (-36 %), South Korea (-18 %) and Japan (-11 %) ­ all declined much more than the average. Imports from the EU were down 3 % y-o-y.

Besides China’s weak domestic demand, the drop in imports reflects developments in international production chains. Imports and exports related to processing trade for November and December were much weaker than average. 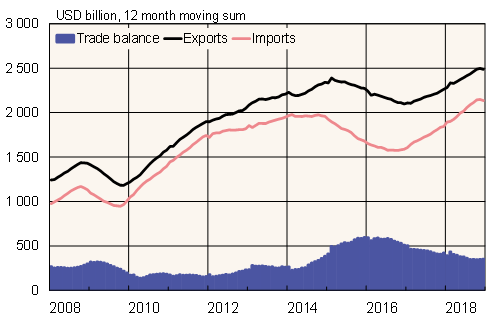