The year-on-year change in consumer prices picked up in December to 4.3 %. In early autumn, consumer price inflation was running at 3.5 % and in November was still well below 4 %. The price spike exceeded all major forecasts, which had expected inflation to stand at 4 % at the end of the year. Prices rose by 0.8 % from November to December. This was much higher than in two previous years.

Food prices saw particularly sharp increases, reaching 4.7 % y-o-y at the end of December. Excluding alcohol, food prices were up more than 5 % y-o-y in December. From November to December, they climbed 2 %. The end-of-year spike in food prices was due mainly to higher prices for fruits, greens and root vegetables, which soared by 9 % in December. This is a rather exceptional change.

The year-on-year change in the prices of non-food goods and services was about 4 % at the end of December. As in previous months, the rise in prices of non-foods and services was quite modest, suggesting that the general hike in the value-added tax from 18 % to 20 % at the start of this year had almost no impact on prices before it came into force. Rosstat reports that consumer prices were up by 0.7 % in the first two weeks of 2019, i.e. the fastest price rise since July 2015. The value-added tax hike does not apply to food, which is subject to a 10 % rate. 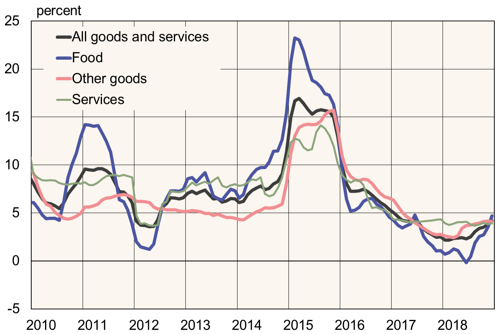