The National Welfare Fund, where the state’s excess revenues from oil and gas taxes are deposited, stood at 58 billion dollars at end of 2018. The size of the Fund declined by 11 % from the end of 2017.

Last year’s budget surplus will be transferred to the Fund later this year. According to preliminary figures, the Fund corresponded to just under 4 % of gross domestic product at the end of last year. Under the 2019 budget, the Fund’s size should rise to around 7.5 % of GDP by the end of this year. The Fund should then continue to accumulate assets so that in 2021 it equals 12 % of GDP. The large savings should help Russia weather weaker economic performance in coming years.

Investments of the National Welfare Fund fall into two categories. The first category consists of assets that are invested in liquid, high-grade sovereign bonds of OECD countries. The second category includes deposits at the state development bank VEB, which then lends the assets forward to fund development projects. At the end of last year, 58 % of the National Welfare Fund’s assets were invested in assets of the first category. Of that, 45 % was held in debt securities denominated in euros, 45 % in US dollars and 10 % in British pounds. 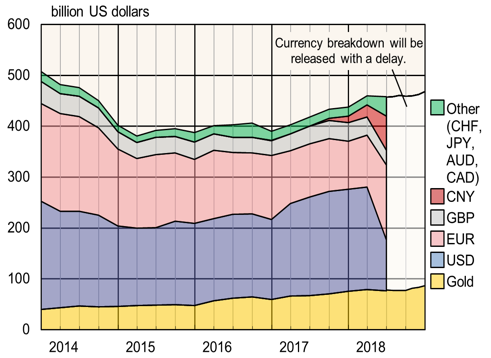 There was a notable shift in Russia’s currency reserves last year. The amount of dollar assets declined sharply in the second quarter, while holdings in euro and yuan assets soared. The Central Bank sold off half of its 200 billion in dollar holdings in the second quarter. According to several analysts, the Central Bank was seeking to become better hedged against possible US sanctions. At the end of June 2018, euro made up 32 % of Russia’s currency and gold reserves, dollar 22% and yuan 15 %. According to the International Monetary Fund, the average composition of global currency reserves was quite different. At the end of June 2018, dollar made up 62 % of them, euro 20 % and yuan just under 2 %.