Rosstat’s revised figures for 2017 GDP released in December slightly increase reported growth from 1.5 % to 1.6 %. In the case of 2016, however, the earlier assessment of a slight contraction in GDP was revised up to 0.3 % positive growth. As the fifth revision of the 2016 figure, it should be Rosstat’s final estimate under its current statistical practices.

Rosstat data on domestic demand has seen some considerable changes. For example, growth in fixed investment in 2017 was revised up at the end of 2018 to 5.5 % (the figure in last spring was around 3.5 %). Such large adjustments in fixed investment figures were earlier seen in the revision of the 2016 figures. In contrast, Rosstat data on export and import volumes in 2015−2017 has remained unchanged throughout almost all of the estimation and revision rounds.

According to Rosstat’s December revision, the 2017 data were adjusted, among other things, to include more precise statistical and accounting data on company operations and the state budget. The latest adjustments in 2016 figures are based e.g. on more accurate data on the use of production inputs and outputs, as well as census of the population involved in farming, which includes some production data. 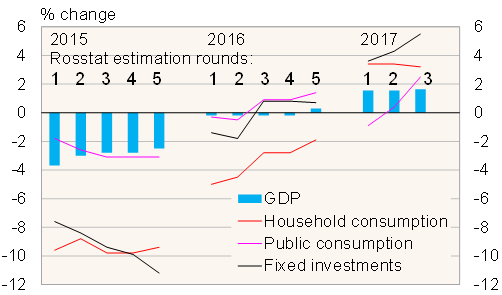