China's most important economic indicators suggest that the economy slowed more in July than the markets had anticipated. Real growth in retail sales fell well below 7 % y-o-y and industrial output growth was 6 % – also below market expectations.

Perhaps the most interesting July figure was the slack in fixed investment. Even using a cautious measure for price developments, the volume of fixed asset investment (FAI) was again well in the red. While real growth in private investment rose slightly, the volume of public investment fell in July well over 10 % y-o-y. Official figures show that fixed investment last year equalled 43 % of GDP and thus continues to play a large role in Chinese economic growth. It is hard to get a clear picture of the actual state of investment in China, however, as FAI figures do not correspond to the national accounting for fixed investment. The two indicators, which earlier moved in sync, seem to be diverging since last year.

There were few surprises in July price trends. Consumer prices were up 2.1 % y-o-y and producer prices rose by 4.6 %. The survey of urban unemployment, now in use for a couple years, showed the urban unemployment rate surging from 4.8 % in June to 5.1 % in July. For China, this is a big shift in unemployment numbers. China's unemployment figures, however, should be regarded with suspicion. 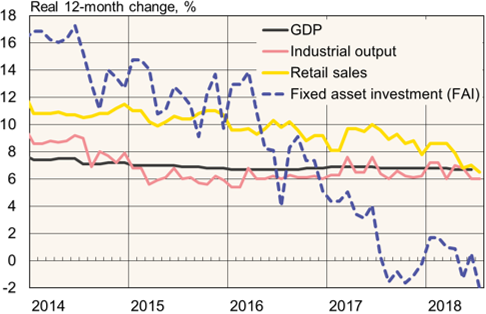