China's bilateral trade surplus with the US continued to grow, however, reaching 162 billion dollars in the January-July period, and increase of 13 % y-o-y. Exports to the US in the first seven months of the year grew by 12 % y-o-y, while imports rose by 11 % (clearly lower than import growth overall). The US share of China's imports has been decreasing during the past year. The US now stands in fifth place after the EU, South Korea, Japan and Taiwan.

Some of the growth in exports and imports reflects exchange rate fluctuations. Despite the yuan's recent weakening, its average value in January-July was still 6 % higher than in the same period last year. The yuan-dollar exchange rate in July was roughly at the same level as in July 2017. Total exports in yuan terms grew by 6 % y-o-y in the January-July period, while imports were up by 14 %. 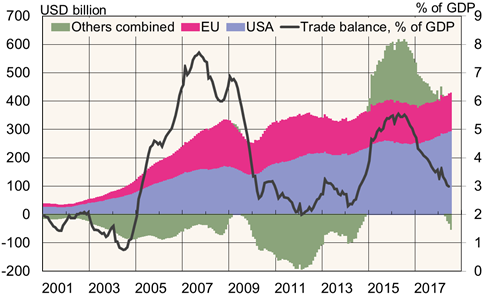