Since the end of July, the Russian ruble has lost about 6 % of its value and Moscow's RTS stock index, which is denominated in dollars, has sunk 8 %. While multiple factors underlie the ruble's depreciation and declining share prices, the single most important reason is probably US sanctions. A new round of US sanctions was announced on August 8, and a US Senate draft bill on additional sanction legislation came to light.

The new sanctions come in response to the Skripal poisoning incident. They include restrictions on the export of certain electronic devices and dual-use devices to Russia. While these restrictions as such have a minor impact, the US is prepared to expand the restrictions in 90 days if Russia brushes them off. For that, Russia is required to assure that it will refrain from using banned chemical weapons and permit inspections of facilities where such weapons are allegedly under development. The next round of sanctions would grant the US government authority to suspend e.g. all Aeroflot flights to the US and ban a large swath of Russia-US bilateral trade. The draft bill includes even more significant measures such as restrictions on the ability of the Russian state and Russian companies to acquire funding and carry out money transactions.

A plan to significantly increase taxation of firms in Russia also emerged from the Kremlin last week. The proposal drafted by the president's office mentioned 14 major firms and caused an immediate drop in their share prices. Russia's financial markets were already roiled by declining oil prices. Oil prices have fallen as forecasts of global growth have been lowered and oil-producing countries have boosted production. The price of Urals-grade crude oil is down about 5 % from the end of July. 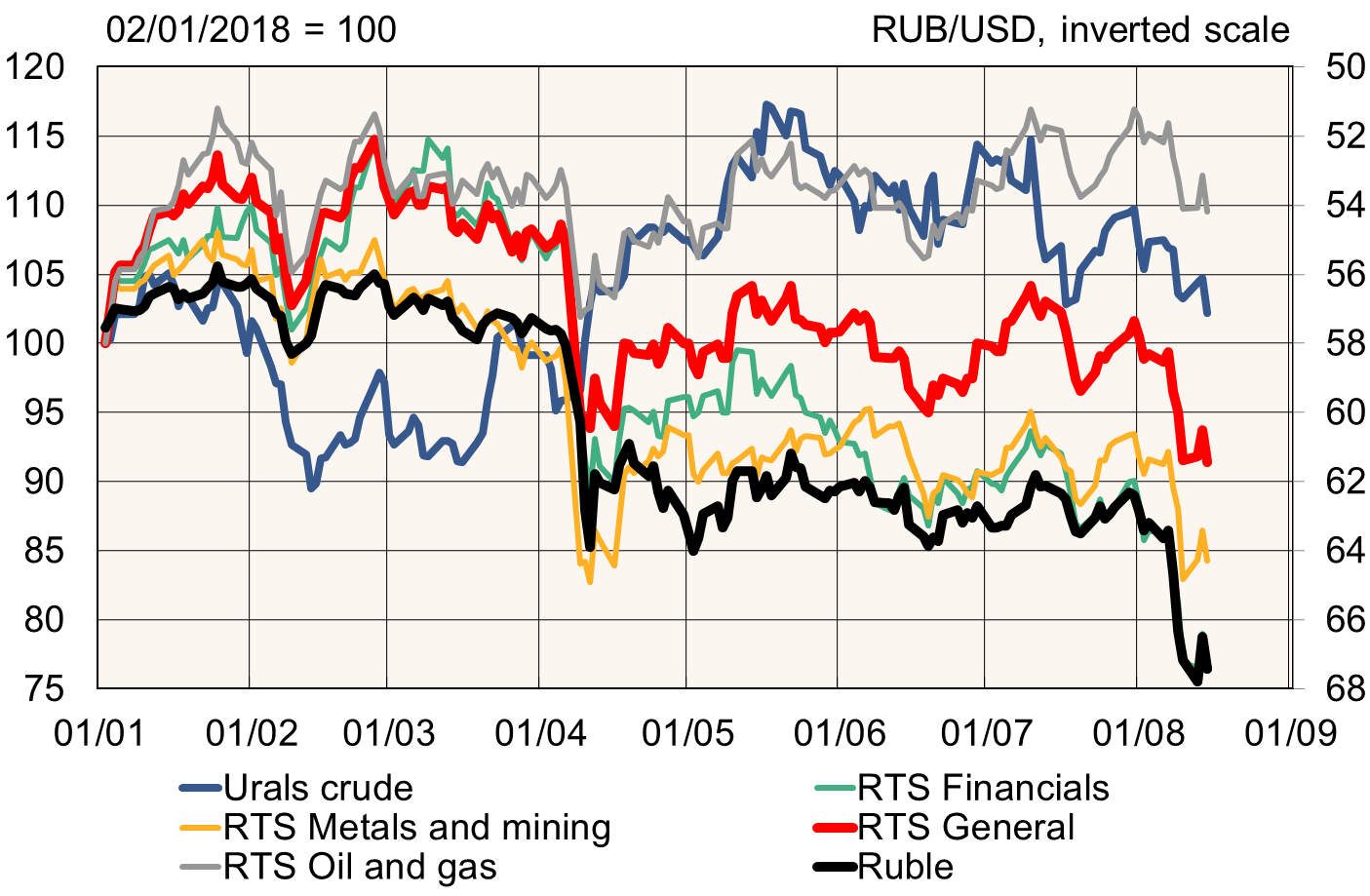 General uncertainty about emerging economies, particularly Turkey, also dragged down Russian markets. Turkey is an important trading partner for Russia. In the first half of this year, 5.3 % of Russian goods exports went to Turkey. The bulk of the exports were natural gas and oil, but Russia also exports metals and metal products to Turkey.

Russia's largest bank, Sberbank, also acquired the Turkish Denizbank in 2012 for 3.6 billion dollars, making it Sberbank's largest stake in any foreign bank. Denizbank has operations in countries neighbouring Turkey as well. In May, Sberbank announced it was selling its stake in Denizbank to Emirates NDB for 3.2 billion dollars. The deal is pending until official approvals are completed.