Industrial output growth climbed from slightly over 3 % in the second quarter to nearly 4 % y-o-y in July. Manufacturing output grew by 4.6 % y-o-y in July, or slightly faster than in the second quarter. Growth in extractive industries accelerated to over 3 %. Judging by Rosstat's previous data revisions, the industrial output data for recent months could later be revised even higher, especially manufacturing output.

Fixed investment in the first half was up by over 3 % y‑o‑y. Fixed investment growth slowed in the second quarter to under 3 %. Construction activity remained depressed, contracting about 1 % y-o-y in the June-July period.

Officially reported real wage information continued to show significant gains in July, up 8 % y-o-y. The rise of household disposable real income, on the other hand, remained at 2 % y-o-y in July. The difference reflects developments in grey-economy wages, as well as meagre gains in non-wage household income.

Retail sales growth, which quite naturally tracks real income trends, was 2.5 % y-o-y in July, the same pace as in the first half of the year. Seasonally adjusted retail sales dipped a bit in July, however. 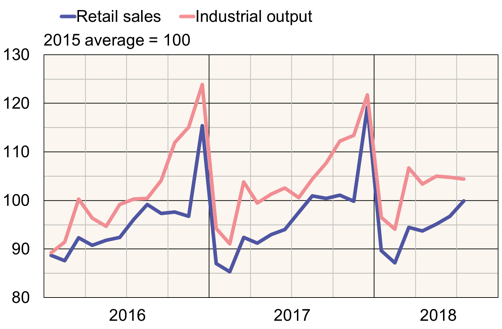