The European Union Chamber of Commerce in China (EUCCC) last week released its annual business confidence survey of European firms operating in China. The report finds that doing business has gotten harder due to increased regulation, barriers to market access and discriminatory treatment of foreign firms. Despite the challenging business environment, however, European firms last year saw a clear increase in profitability. The percentage of European firms whose Chinese operations showed positive earnings before interest and taxes last year (77 %) was the highest since 2005. The most successful firms were those involved with pharmaceuticals, transport & logistics, and car manufacture. The majority of surveyed European firms said they were planning to expand their operations in China in 2018. Pessimistic readings of the near-term outlook were also lower than last year.

Expressing a new set of concerns, over half of respondents said that the innovation capabilities of Chinese firms today match or exceed those of European firms. The investments in product development and improved production quality have raised the competitiveness of Chinese firms. This change further evident in the fact that the profitability of European firms, particularly those in the IT and data communications branches, have declined substantially in recent years.

As Chinese firms strengthen their technical capacity and penetrate international markets, the pressure to protect Chinese intellectual property rights has also grown within China. In a stark change from earlier surveys, 34 % of respondents said that China has been doing an adequate job in implementing intellectual property protections. There is still room for improvement; over half of respondents still considered Chinese IP protections inadequate.

Stiffer competition has increased demands for a level playing field. This demand is nothing new; EUCCC surveys have hammered on the issue of unfair treatment of foreign firms for years. The latest survey reports that nearly half of European firms said that regulations hamstring their business activities and believe that the regulatory environment will only become harsher in the years ahead, with small and mid-sized European firms bearing the brunt of this squeeze. 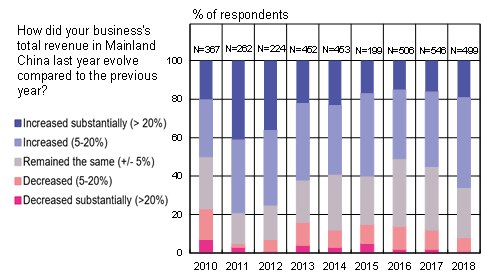