Last Sunday (June 24), the People's Bank of China announced it would lower its reserve requirement ratio (RRR) for most banks by a half percentage point effective July 5. Large banks are currently required to deposit an amount equal to 16 % of their deposits with the central bank. The RRR for mid-sized and small banks is 14 %. This latest drop in the reserve requirement increases the amount of money available for bank lending by about 700 billion yuan ($108 billion).

The reserve requirement was previously lowered by one percentage point in April, when banks were ordered to use most of their freed-up assets to pay back their medium-term lending facility (MLF) loans to the PBoC. The latest RRR cut is geared to helping firms and the real economy. The easing is a response to May's slowdown in domestic demand (fixed investment, retail sales) and the threat to foreign demand caused by a looming trade war. The increase in uncertainty has been reflected in continued declines in share prices on Chinese stock markets. The PBoC has let the yuan depreciate against the dollar, with the yuan-dollar rate now clearly lower than at the start of the year. On June 29, one US dollar bought 6.61 yuan.

Shifting reserve requirements, fluctuating interest rate levels, the use of multiple lending schemes and dictation of policy directly to banks (window guidance) have made it difficult to gauge China's monetary policy stance. This challenge is made even harder as PBoC measures often come with conditions. Now, for example, large banks are expected to use their freed-up assets from the RRR cut to deal with over-indebted firms (e.g. debt-equity swaps). China has been hoped to replace manual steering with market-based and transparent interest-rate policies. China's current problems in signalling monetary policy are further complicated by the government's own contradictory economic policy goals. As China's central bank lacks independence, it must reconcile the near-impossible simultaneous goals of bolstering economic growth and reducing financial risk by restricting access to credit. 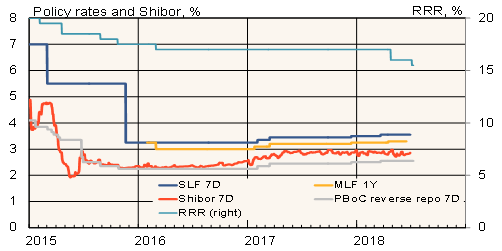