The Central Bank of Russia decided last Friday (Jun. 15) to hold the key rate at 7.25 %. As the main reason for the decision was stated the proposed increase in the value-added tax (VAT) next year, which the CBR expects to add a percentage point to the inflation rate. The CBR also raised its inflation forecast to 3.5–4.0 % this year and 4.0–4.5 % next year.

For now, inflation has remained moderate, as consumer prices were up just 2.4 % y-o-y in May, the same as in April. Price trends are diverging by product groups, however. Food price inflation has nearly stopped in recent months, while the inflation of non-food goods has accelerated led by gasoline. The government has already decided to cut the excise tax on gasoline at the start of July to rein in the price growth.

The CBR's outlook for inflation and interest rate policy have shifted notably in recent months. As recently as March, the CBR was still lowering its key rate and gave guidance on a continuing trend to lower rates. Now the CBR observed that current circumstances require a slower transition to a neutral monetary policy stance. The change reflects increased inflation pressures caused by e.g. ruble depreciation and the planned tax increases. 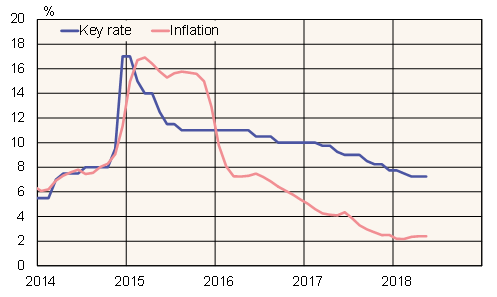