In recent months, foreign investors have been selling their assets in emerging economies. Some of the sell-offs have been driven by rising expectations of currency depreciations. Investor global jitters, in turn, have exacerbated market swings. In emerging economies such as Turkey, Venezuela and Argentina, also domestic economic and political challenges have amplified market turbulence. Foreign investors in the Russian market began to reduce their exposures in early April after the US added Russian businessmen, public officials and companies to its Specially Designated Nationals and Blocked Persons List (SDN) sanctions. Recently market swings in Russia have, however, been fairly moderate.

The ruble-dollar exchange rate at the start of this year was around 56–58. Immediately after the imposition of the SDN sanctions, the ruble lost about 9 % of its value. It then has stabilised around a level of 62–63 rubles to the dollar.

Trends on the Moscow stock exchange typically track the oil price because Russian share indices are heavily weighted with oil and gas companies. Brent crude hit a high of close to $80 a barrel at the end of May, only to retreat to its current level of around $75. The oil price has risen about 12 % since the start of the year.

After SDN sanctions were announced, Russia's dollar-denominated RTS index fell about 12 %. Since then, however, it seems to have again followed the developments of oil prices. In recent days, the RTS has hovered in the range of 1110–1125, or about 9 % below its level before SDN sanctions. Since mid-April, foreign investors have sold off roughly $1.1 billion in Russian equities. The moderate recent reactions among foreign investors have been regarded to reflect Russia's current account surplus, fiscal policy (e.g. budget discipline and low level of government debt) and high oil prices. 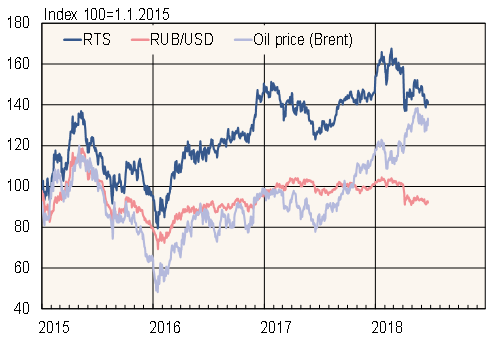