The People's Bank of China reports that its broad measure of credit, Total Social Financing (TSF), was up 12 % y-o-y in December. The TSF stock rose by a percentage point less than in December 2016. The stock of bank loans, which represents over two-thirds of TSF financing, continued to rise at the same pace as in 2016 (about 13 % y-o-y). The stock of TSF credit reported for the shadow banking sector grew faster than the traditional banking sector (up 15 %). Most growth came from trust and entrusted loans. Such loans are subject to new restrictions from the start of this year. Growth in corporate bond financing was lower than the TSF average.

About half of new bank lending went to households. The stock of household loans rose by about 25 % over the course of last year. Fastest growth was in short-term household lending, usually in the form of unsecured credit (at year's end the pace of growth exceeded 40 % y-o-y). Such credits are partly used as bridge loans (e.g. to help meet the downpayment on an apartment purchase). Household lending has increased in recent years and now accounts for about a quarter of bank lending. The stock of corporate loans rose 13 % y-o-y in December. 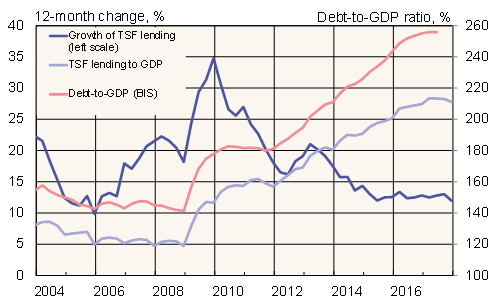