For the entire year 2017, federal budget revenues increased by 18 % (again, excluding the money from the 2016 sale of the Rosneft stake). Tax revenues from oil & gas were up by nearly 25 %, significantly outperforming original budget projections. The additional oil revenues to be transferred to the Reserve Fund were abundant as the average price of Urals-grade crude last year climbed to 53 dollars a barrel (the initial 2017 budget assumption was 40 dollars). Other budget revenues increased by 15 %, e.g. on higher VAT revenues that account for over 55 % of the federal budget's non-oil revenue streams and about a third of total federal budget revenues. Tax collection improved.

On-year growth in federal budget spending picked up in the fourth quarter (excluding the massive government repayment of bank loans taken on earlier by defence contractors, a.k.a. the OPK complex, at the end of 2016. Rather tight budget discipline was maintained last year, with spending increasing by 5 % (excluding the OPK bank loan repayment), or about 1 % in real terms. Defence spending fell by about 4 % (or about 25 % if the 2016 OPK bank debt operation is included). Spending on domestic security and law enforcement increased about 1 % in nominal terms, while a lot of the spending in this category was allocated from other subcategories to Russia's National Guard, which currently accounts for a substantial part of Russia's domestic security forces. 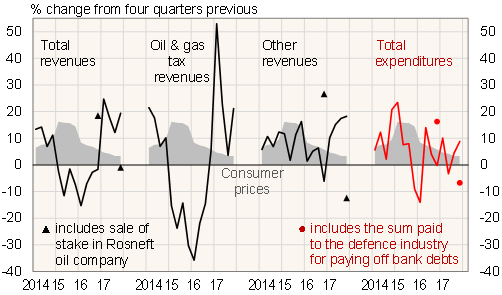