Russian revenues from goods and services exports, as well as spending on goods and services imports were each up roughly 20 % y-o-y in the final quarter of 2017. Growth in goods imports was about 20 %. Russian spending on travel abroad was up by nearly 30 %, matching the growth pace of previous quarters. The trade and current account surpluses of the fourth quarter were notably large on export earnings from higher oil prices.

Russian foreign trade continued to climb out of a deep two-to-three-year hole. Even with the recovery, however, levels of revenue and spending on goods and services trade in the last quarter of 2017 were still several per cent below the 2014 level and about 20 % below the level of 2012–13.

Net outflow of private capital abroad was quite notable in the latter half of 2017. The corporate sector (excluding banks) received relatively little foreign direct investment. The outflow of corporate FDI from Russia continued evenly over the course of last year and was slightly larger than FDI inflows. Companies made only small repayments of their foreign debt. In the second half of 2017, other outflows of corporate capital showed an increase. Banks, in contrast, actively paid down their foreign debts throughout the year. 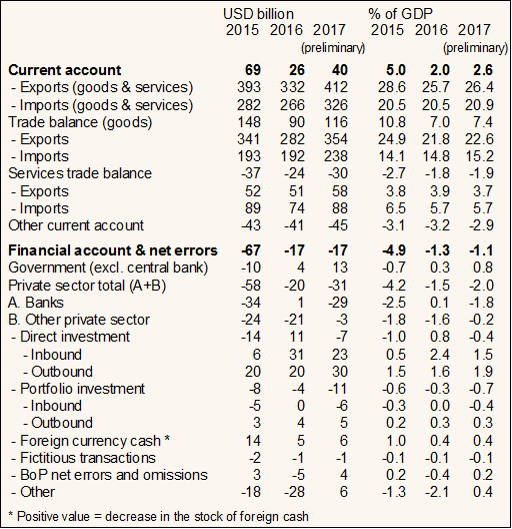