At the end of last year, a nearly six-month slide in seasonally-adjusted industrial output stopped. For 2017 overall, industrial output was up 1 %. The score was dragged down especially by manufacturing, which, due to a weak late part of the year, saw growth fall to almost zero for the entire last year. Late in the year, the electricity and heating sector also had an effect as it contracted due to unusually warm weather. As a result, there was no growth in the sector's production last year. Production of extractive industries rose by 2 %. Growth was limited by a decrease in oil production in autumn to levels below highs reached a year earlier. The decrease reflects implementation of production limits agreed with OPEC countries and other oil-producing nations. The role of oil production was relatively small in causing the industry total's weak performance towards the end of the year.

Agricultural output increased by 2.4 % last year, a slower rise than in previous years. The growth in vegetation output subsided to slightly over 2 %. While the grain harvests hit a record, harvests of other crops were mostly smaller than in 2016. The growth in livestock production rose to nearly 3 %. The slow decline in construction activity continued throughout 2017 (down 1.4 % for the year). Growth in the volume of transported goods accelerated to over 5 % due to increased freight haulage by rail and pipeline transmission.

Retail sales recovered gradually last year, with the volume of sales up more than 1 % from 2016. The average real wage rose by 3.4 %, but other sources of household income showed weak development. Thus, real household incomes were still slightly lower than in 2016.

In recent years, primary production based on natural resources has grown – especially farm output but also mineral extraction. Goods transport has also increased. 2017 manufacturing output, in contrast, was slightly lower than in 2014. Construction and retail sales, which were hit hard by the recession, were 10 % smaller than in 2013. 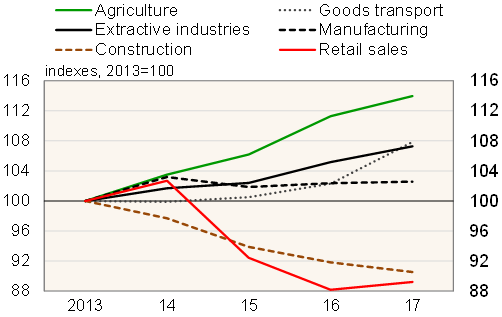