Education at a Glance 2017, the latest publication of the education database kept by the Organisation of Economic Cooperation and Development (OECD) broadly assesses the school systems of many countries, their spending on education and outcomes. The survey also covers several non-OECD members, including Russia and China.

Figures from 2015 show nearly 60 % of Russians in the 25−34 age group had completed tertiary (i.e. college-level) degrees, putting them on par with the South Koreans and the Japanese, but well above the OECD average of 42 %. Only 18 % of this age group in China had completed tertiary education, and just 14 % in India. Russia's high tertiary education figures partly reflect the fact that in the Russian system students enter and graduate university at relatively young ages. Most degree-holders have something less than a master's degree (short-cycle tertiary or bachelor's degree). The phenomenon is not new as also about 55 % of Russians between the ages of 25 and 64 have college degrees.

Tertiary education in Russia currently focuses heavily on business, administration and law. Some 38 % of degrees granted in 2015 went to students majoring in one of these three fields. The average for OECD countries was 24 %. In addition, 24 % of Russian students took degrees in natural sciences, engineering or math, compared to an OECD average of 20 %. The share in Germany was 32 %. Russia graduates relatively fewer professionals with degrees in education or healthcare than other OECD countries.

Russia currently devotes relatively few resources to education by international standards. In 2014, Russia's education spending was just 3.4 % of GDP, the lowest for any country in the report except Indonesia. The OECD average was 5.2 %. The picture is similar when comparing cumulative spending per student. Regional differences in education spending in Russia are, however, huge. 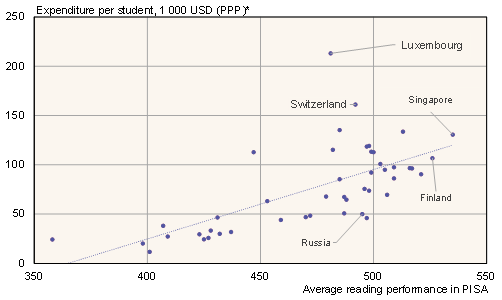