China's bank lending stock rose in August by 13 % y-o-y. While growth in lending to households has slowed slightly in recent months, the stock of household credit has increased faster than the credit stock overall (up 30 % y-o-y in August). In the first eight months of this year, over half of new lending went to households, mostly in the form of housing loans. The bank lending stock equals roughly 150 % of GDP, a quarter of which is household borrowing.

Bank lending to corporations, government and to non-bank financial companies has slowed this year to around 8 %, while non-traditional financing sources have become increasingly important for firms. Growth in China's broadly defined stock of total social financing (TSF) rose in August by 13 % y-o-y. Shadow bank lending has accelerated recently and firms have also resorted to new non-TSF financial arrangements.

Growth of M2, the broader measure of the money supply, has slowed this year, rising by just 9 % y-o-y in August. Slowdown reflects things such as faster pace of financial transactions rather than slower credit growth. In its latest monetary policy report, the People's Bank of China said it was reducing M2's role as a gauge of monetary policy due to its weakened link to economic development. 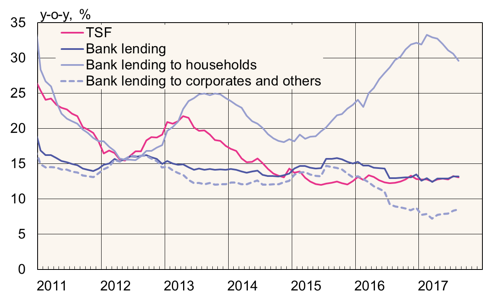