China's GDP growth accelerated to 6.9 % p.a. in the first half of this year. The pick-up is not likely to last, however. BOFIT's latest Forecast for China sees growth slowing towards the end of the year, with GDP expected to grow by about 6.5 % this year, 6 % next year and 5 % in 2019. Even with lower growth, China's growth is high and closing the gap with advanced-world living standards. Growth will continue to be driven by the domestic market. Consumer demand and investment growth are supported by strong wage growth, urbanisation and productivity gains.

A growth slowdown in China is a natural development as major structural factors like the huge size of the economy, ageing population with fewer working-age people and environmental problems reduce growth. Moreover, the structure of the economy is changing as evidenced by lower fixed investment growth and the rising importance of domestic consumer demand and services. Productivity growth has slowed with the easy productivity-enhancing measures already taken and services account for an ever-increasing share of economic output.

In 2012, China set the goal of doubling its 2010 real GDP by 2020. The government has had to apply heavy stimulus to achieve the high GDP growth needed to hit that target. It also seems that officials have felt pressure to fudge their growth figures. At the same time, China's debt has soared. The experiences of other countries with extended episodes of rapid indebtedness end almost without exception in crisis. As a result, financial sector stability has become a major theme of China's leadership. Nevertheless, no significant measures to rein in credit growth have been implemented. The possibility of a financial market crisis and sharp reduction in economic growth during the forecast period cannot be ruled out.

The 19th Party Congress next month could be a turning point for policy, but the government's recent focus on excessive stability and increasing the role of the party in the economy have diminished hopes for serious market reform. 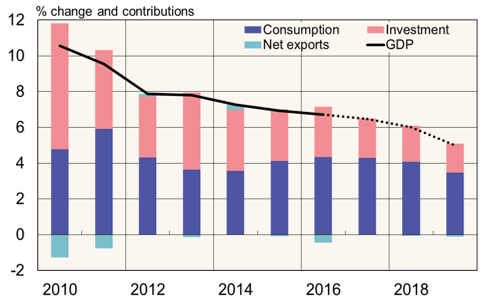