Lifted by higher oil prices, Russian GDP has returned to positive growth this year as anticipated. BOFIT's latest Forecast for Russia sees GDP rising by 1.5 % p.a. through 2019 on the assumption that oil prices remain roughly at their current levels.

Growth will be driven by domestic private demand, which has gradually recovered this year. Household consumption is supported by increasing real wages and reviving household borrowing. Fixed investment is also expected to continue moderate growth as Russian industry already operates near full capacity. Further growth of fixed investment is limited, however, especially by the difficult business environment and uncertain economic outlook.

Government spending is not expected to increase in real terms this year and the preliminary budget framework anticipates even harsher spending discipline in coming years. Inflation has slowed down close to the Central Bank of Russia's 4 % target and the CBR has signalled that it will continue to cut interest rates if inflation pressures permit.

Forecast uncertainty is caused by oil price trends, which impact the Russian economy rapidly. The approaching presidential election could add pressure to increase public spending and temporarily raise growth. Growth could also be helped this year if demand is oriented more towards domestic production than imports for the latter part of the year.

Russia's economy is expected to continue moderate 1,5 % growth in coming years. With the economy at near-capacity, higher sustainable growth would require structural reforms that are currently not in sight.

Forecast for Russian GDP and import volume for 2017–19 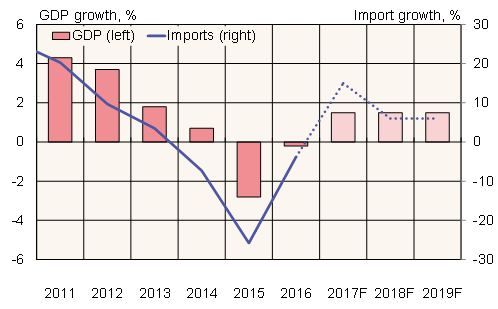