The finance ministry predicts revenues to this year's consolidated budget (federal, regional and municipal budgets plus state social funds) to increase by over 10 % in nominal rubles (when the income received from the sale of a stake in state oil giant Rosneft is not included in 2016 revenues). Most revenue improvement comes from an over 20 % increase in oil & gas related taxes, duties and fees. The finance ministry expects Urals-grade crude oil to average slightly less than 50 dollars a barrel this year, which is well above the 2016 average price. Revenues have also been boosted by changes in oil & gas taxation. Other budget revenue streams are expected to increase by 9 % this year. Spending should increase by over 6 % (omits costs of large 2016 financing package to help defence contractors pay off bank loans). Thus, the consolidated budget deficit would be 2.3 % of GDP.

In its newest version of the 2018–20 budget framework, the finance ministry expects consolidated budget revenues to increase by about 6 % next year, over 2 % higher than inflation, and in the following years at about the pace of inflation. As in previous years, revenues are estimated to reach 32–33 % of GDP. Oil & gas tax revenues will shrink next year if the average price of Urals oil falls as expected to below 44 dollars a barrel. Other revenue streams should keep growing next year at 9 % and at a robust pace also in the following years. Estimates of other revenue growth assume the economy ministry's forecasted annual GDP growth above 2 % materialises and tax collection is improved. Besides scheduled tax increases, a few new minor tax hikes have been proposed.

The consolidated budget deficit should contract to 1.5 % of GDP next year and less than 1 % of GDP in 2019–20. Based on the revenue estimate, the deficit target and the new federal budget spending rule, the finance ministry expects spending in nominal rubles to rise by less than 4 % next year and by just 2 % in 2019. Inflation is assumed to run at around 4%. The spending is set to decline towards 33 % of GDP. 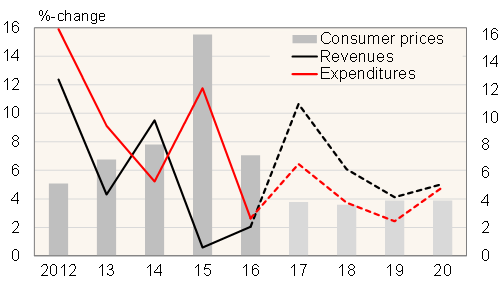