Nominal growth in retail sales turned negative in October, shrinking by 0.5 % from a year earlier. Based on October consumer price inflation (2.1 % p.a.), real growth in retail sales was strongly negative. The rise in both food and energy prices slowed in October. Core inflation, which excludes these two most volatile categories remained unchanged from September at 0.6 %.

Producer prices began to decline in October and producer price inflation was-1.3 %. On-year growth in industrial output slowed to 5 % last month. The slowdown in growth was broad-based across many production branches. Exports went into a downturn, contracting by 0.6 % y-o-y in dollar terms in October. Imports contracted by 1.1 %. Import and export prices have both risen in recent months at around 10 % y-o-y, although the rate of rise has slowed. Export volumes declined on-year in both August and September. Import volumes have declined every month since February. October foreign trade volume data will be released later.

October data on real estate sector activity reveal that building starts and the volume of apartment sales continued to contract year-on-year. Growth in the stock of housing loans slowed to below 4 % y-o-y. The People’s Bank of China and the China Banking and Insurance Regulatory Commission (CBIRC) last Friday (Nov. 11) presented financial institutions a 16-part plan to help stabilise the real estate sector. The plan seeks, among other things, to support the completion of existing construction projects and secure financial stability by preventing larger defaults. Financial institutions are requested to ease off on lending and grant extensions to payment times. However, the measures do not resolve existing problems so much as kick the can down the road. In addition, the downturn in the real estate sector is strongly linked to China’s zero-covid policies. As long as households experience high uncertainty and have weak confidence in the future, the outlook for demand in the housing market will remain subdued.

The downward trend in China’s economic growth continued in October. 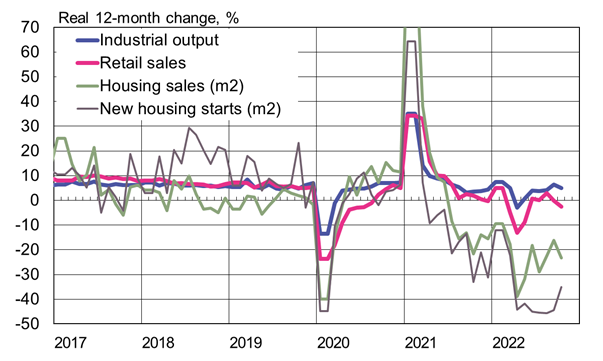