Preliminary figures from the economic development ministry show Russian GDP contracted by 5 % y-o-y in September, a slightly higher pace of decline than the 4 % recorded for July and August. For the January-September period, the ministry estimates GDP shrank by 2 % y-o-y. Russian GDP was still growing briskly in January and February prior to the invasion of Ukraine.

September deterioration was led by consumption. The drop in consumer demand deepened with the volume of retail sales down by about 10 % y-o-y in September. Consumer demand was quelled by reduced purchasing power as real incomes shrunk by more than 3 % y-o-y during July-September. Consumption was further depressed by the partial mobilization that started in late September.

The decline in industrial output deepened in September. Production of mining and quarrying industry contracted by 2 % y-o-y. While crude oil output was up slightly, growth slowed to just 0.5 % in September. Production of all other major mining products contracted. The drop was led by lower output of natural gas, which was down by 26 % y-o-y (not including LNG). The drop in manufacturing output accelerated in September to 4 %.

The economic impacts of the partial mobilisation, which started in late September and was stated as completed at end-October, are already apparent. Russian company surveys from October reveal that about a third of respondents said that the mobilisation had affected their employees. An even larger share of firms said they expected the mobilisation to affect negatively the labour market and demand in coming months.

Most core sectors of the Russian economy contracted further in September 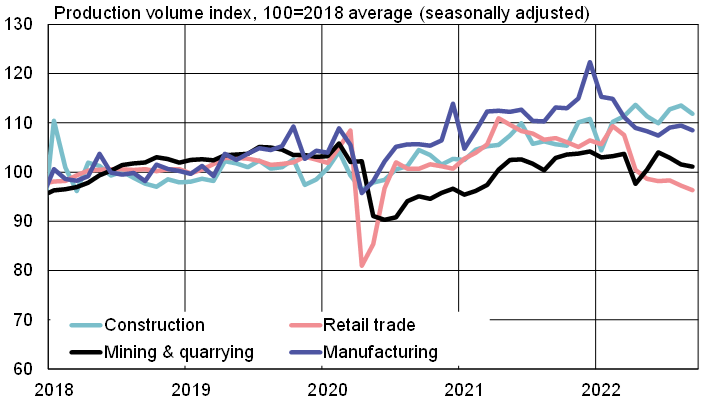