Last month the Bank for International Settlements (BIS) released its Triennial Central Bank Survey of foreign exchange and over-the-counter (OTC) derivative markets. This year’s survey found the yuan’s share of international foreign exchange trading was 7 % in April, with the yuan rising to become the world’s fifth-most-traded currency. As two currencies are involved in any currency trade, the sum of currency trades adds up to 200 %. Thus, the respective currency shares in April were 88 % for the US dollar, 31 % for the euro, 17 % for the Japanese yen and 13 % for the British pound. The yuan’s share in the April 2019 survey was 4.3 % (8th most exchanged currency) and 4 % in the 2016 survey.

Use of the ruble in forex trade has collapsed, falling from nearly 2 % in 2013 and 1.2 % in 2019 to just 0.2 % in April 2022. The Indian rupee’s share remained around 2 % and the Hong Kong dollar’s share fell from 4 % in the 2019 survey to just under 3 % this year. 94 % of ruble trades are done against the dollar, and the dollar is even more dominant counterparty currency in rupee trading (97 % of turnover). The bulk of the ruble forex trading is concentrated in the UK. 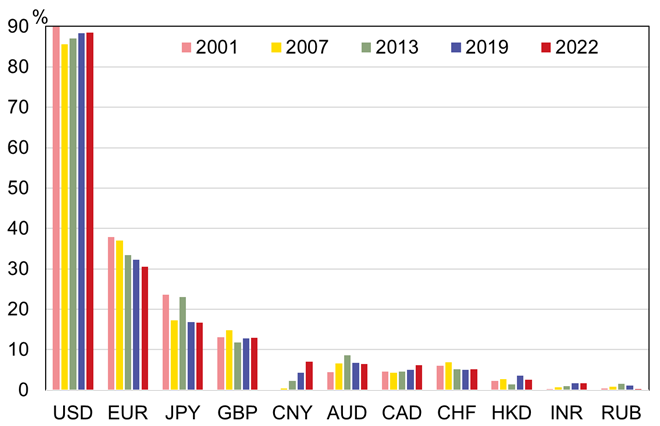 As two currencies are involved in each transaction, the sum of shares in individual currencies in foreign currency trades totals 200%.