China experienced a record heat wave in recent weeks that led to record high temperatures and drought in central and southern China. This has especially affected the province of Sichuan which depends heavily on hydropower for electrical power generation. Approximately 80 % of all power produced in Sichuan is generated at local hydropower plants. With river levels dropping, the provincial government has limited electricity use in homes, offices and shopping centres, and called on factories using large amounts of electricity to shut down operations for a week. The disruptions affect especially producers of metals, fertilisers, semiconductors, automobiles and batteries.

The power shortages have also affected provinces on China’s eastern parts that depend on Sichuan hydropower, including Shanghai, Zhejiang and Jiangxi. At the start of this week, Shanghai shut off lights from its landmarks on the Bund and measures have been reported also in the provinces of Jiangsu, Anhui and Zhejiang, some of which have imposed restrictions on factories, reduced lighting on public spaces and called for citizens to save electricity. However, electricity rationing itself is nothing new for China. Just last winter, provinces across China imposed restrictions on electricity use to deal with shortfalls in coal supplies (BOFIT Weekly 40/2021).

Hydropower, currently China’s biggest source of renewable energy, accounted for about 16 % of the country’s electricity production last year. Sichuan province is the largest producer, accounting for 26 % of all electricity generated with hydropower. Overall Sichuan’s hydropower plants generate about 4 % of China’s total electricity supply. The problems of recent weeks have highlighted possible vulnerabilities related to hydropower, raising doubt about its dominance as a renewable energy source. In addition to summer heat swings, the dry inland winter season can limit hydropower generation.

To assure energy security in the future, China has to also rely on other energy sources to generate electricity. Most of the production still relies on non-renewable energy sources, which does not fully align with China’s climate targets. Over 60 % of China’s electricity production is generated with coal. Despite large investments, wind power last year generated just 7 % of China’s electricity while solar represented 2 %.

Most of China’s hydropower generation comes from southern China, where risk of fluctuating temperatures and droughts has increased 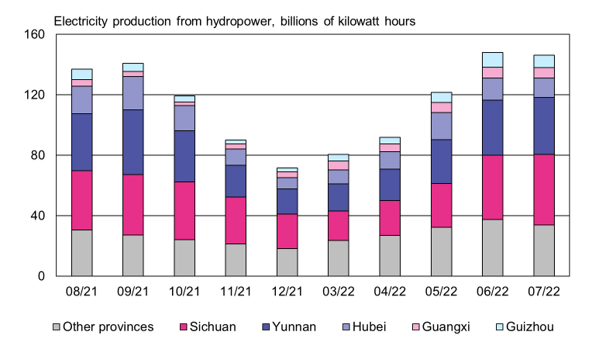