Last spring, five smallish banks in the Henan and Anhui provinces suddenly refused customer access to their deposits. It eventually emerged that this was caused by a massive embezzlement scheme. According to media reports, deposits were transferred to the bank’s largest shareholder on the basis of falsified lending contracts. The freeze on deposits touched off a wave of protests that lasted almost three months. Officials eventually promised that small depositors would be repaid. Hong Kong’s South China Morning Post reported this week that many small depositors, who should have already been repaid their deposits, are still waiting.

Official actions have been scrupulously monitored as China has a huge number of small banks. The fear is that a broad swath of depositors will begin to pull their assets out of small banks, which could quickly escalate to larger problems. In mid-June, officials tried to calm depositors by announcing that the risk exposures of other small banks were under control. China established deposit insurance scheme in 2015 and it should cover close to all bank deposits.

The plight of China’s small and mid-sized banks entered the public discussion with the failure and seizure of the regional Baoshang Bank in 2019. Since that event, the government has stepped in to rescue a number of small and mid-sized banks, and spent at least 500 billion yuan on clean-ups by autumn 2020 (BOFIT Weekly 40/2020). The government feared that the covid pandemic would drive more banks into difficulties as some borrowers have suffered profoundly from covid shutdowns and other restrictions, and for which insolvency seems inevitable. The supports offered to firms in form of cheap loans and temporary suspensions of payments on principal and interest may also have weakened the quality of bank lending portfolios. Officials encouraged small and mid-sized banks a couple of months ago to acknowledge and jettison non-performing loans (NPL) on their balance sheets. To help off-load NPLs, the China Banking and Insurance Regulatory Commission (CBIRC) relaxed its rules in July to allow the country’s large bad banks to help small and mid-sized banks by taking over their non-performing assets. China is also building up a financial stability fund to deal with systemic risk. 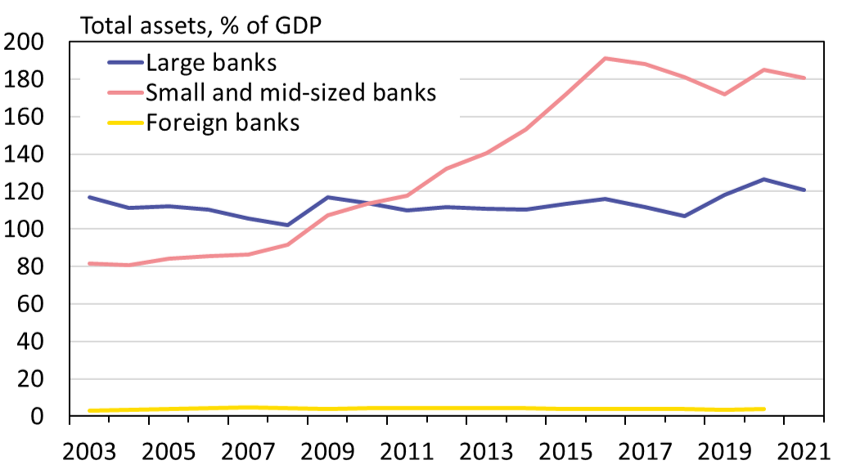