Federal budget revenues in July declined by 25 % from a year earlier. Tax revenues from oil & gas production, as well as export tariffs on oil, oil products & gas, fell for the first time this year, dropping more than 20 % y-o-y. While the dollar price of Urals blend crude oil was notably higher still in June and July than a year earlier, it was considerably lower in ruble terms from a year earlier. The ruble valuation of oil & gas tax revenues (almost entirely denominated in dollars) has declined in recent months on ruble appreciation. The ruble’s exchange rate against the dollar in June-July was up 27 % y-o-y.

Federal revenues other than from oil & gas taxes fell by nearly 30 % y-o-y in July. Budget revenues from imports plunged on the sharp drop in imports and a strong ruble. Revenues from value-added taxes (VAT) on imports were down by about 40 % y-o-y in May-July, while revenues from import tariffs were off by about 60 %. VAT revenues collected from domestic production have swung wildly from month to month this year, despite much less volatile production and consumption. The domestic VAT revenues were up over 50 % y-o-y in May and June, but were down by 40–50 % y-o-y in April and July. The swings in VAT streams probably reflect variations in collection as well as possible fluctuations in VAT refunds.

While it is hard to get information on Russia’s federal budget spending at the moment, total budget spending in July was up by 25 % y-o-y. For all of the January-July period, spending growth exceeded 20 % y-o-y, outstripping the inflation rate. Fairly comprehensive information from the Russian Expert Economic Group on the federal budget’s large spending categories such as social spending and spending on various sectors of the economy indicates that spending in these categories has increased moderately this year. The rapid growth in other spending suggests fast rise in such major spending categories as defence and domestic security & law enforcement.

Russia’s federal budget has turned into red, and the deficit for July was particularly large. For all of 2022, the deficit is on track to hit a couple of percent of GDP if spending increases this year do not exceed 20 % and the price of Urals and the ruble’s exchange rate, which affect oil & gas tax revenues, as well as other budget revenues remain at the levels similar to recent months. 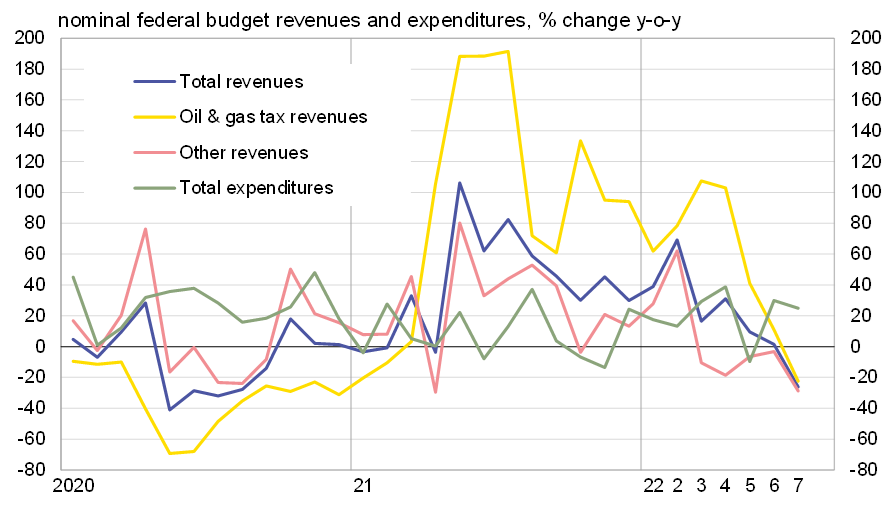