With consumers uncertain about the future and a troubled real estate sector, July economic growth underperformed June across the board. Retail sales, a rough indicator of private consumption trends, rose by just 2.7 % y-o-y in nominal terms. China does not release real trade growth figures, but it can be inferred from July’s consumer price inflation number of 2.7 % that real growth was close to zero. Total service sector output in July contracted from June, and was up by only 0.5 % from a year earlier.

Nominal fixed investment in the first seven months of this year rose by 5.7 % y-o-y. In January-June growth was still over 6 %. Investment in infrastructure increased by over 7 % y-o-y in January-July, while real estate investment contracted by more than 6 %. July real estate sales (measured in terms of both floorspace and yuan) were down by about 30 % y-o-y, and new building starts were down by 45 % y-o-y. The decline in China’s real estate sector has lasted about a year. Most larger cities saw slumping apartment prices last month.

July industrial output growth was about the same as in June (up 4 % y-o-y), and driven mainly by energy production and mining & quarrying activity. Manufacturing growth, in contrast, slowed by over half a percentage point from June to less than 3 % y-o-y. Certain green energy products such as electric vehicles and solar panels, however, experienced strong growth in July. 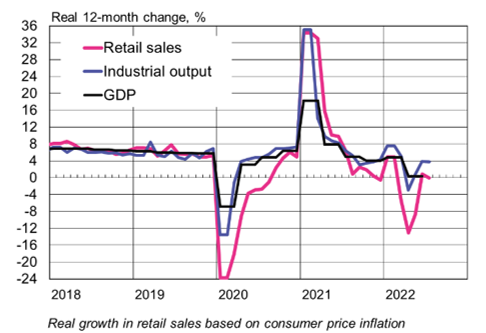