At least 20 of China’s 31 provinces have restricted electricity use during September and October. While the restrictions most severely apply to heavy industry, many places have also seen power cuts to households and municipal infrastructure. Firms and households have also been asked to save electricity. The electricity shortages are the result of higher world energy prices and also partly China’s efforts to curb emissions disrupting coal supplies. 68 % of China’s electricity last year was generated by coal-fired power plants.

Electricity supplies have been restricted to some extent since early summer. Blackouts are not uncommon during the winter heating season, but the current electricity supply issues are reportedly more extensive than anything seen in years and affect provinces that generate the bulk of China’s aggregate output e.g. Guangdong, Jiangsu and Shandong provinces. The problems are expected to depress industrial output in the second half of this year.

The price of coal in China has risen rapidly. Thanks to regulated and low electricity rates, production at coal-fired plants has become unprofitable. China’s domestic coal production has failed to keep up with demand, which has meant companies have burned through their coal stocks. Several coal mines have been closed for environmental and security concerns. Working in Chinese coal mines is dangerous. Several major accidents have occurred at Chinese coal mines this year. In addition, as the China-Australia relations took a turn for the worse, China completely suspended coal imports from Australia in December. China has since been unable to make up for the shortfall with imports from elsewhere. Prior to the ban, 30 % of China’s coal imports came from Australia. Between January and August this year, China imported 10 % less coal than in the same period a year earlier. At the same time, power generated by coal grew by 6 % and electricity consumption by 14 %. In addition to problems with coal supplies, natural gas prices have gone through the roof and droughts have reduced hydropower generation.

In August, the National Development and Reform Commission (NDRC) released a list of provinces that had failed to reach their emission reduction targets in the first half of this year. Provinces have subsequently limited their power consumption and generation. China’s goal is to reduce its “energy intensity” (energy consumption/GDP) by 3 % this year and 13.5 % by 2025. Provinces have been given their own targets.

As coal supplies have become harder to come by, many provinces have increased their power prices by 10 %, the maximum regulators allow. Electricity rates in China are still strictly regulated, even if last year regulations were relaxed to allow regional electricity rates to be raised by as much as 10 % or cut by as much as 15 % in response to shifts in supply and demand. In September, the NDRC ordered coal companies and power generators to make longer term coal sales contracts that meet the coal demand and are priced at levels below current high spot prices.

With the problems continuing, restrictions on electricity generation have been eased. The NDRC has released government reserve coal to the market, relaxed capacity restrictions on coal production and called for increased coal imports. Last week, the central government ordered energy companies to guarantee electricity supplies for the winter heating season at “all costs.” This week, the China Banking and Insurance Regulatory Commission (CBIRC) exhorted banks to increase their lending to coal and energy companies and strictly banned speculation in prices of commodities such as coal.

While regulated electricity rates for users remain low, coal prices have gone through the roof on China’s commodity exchanges 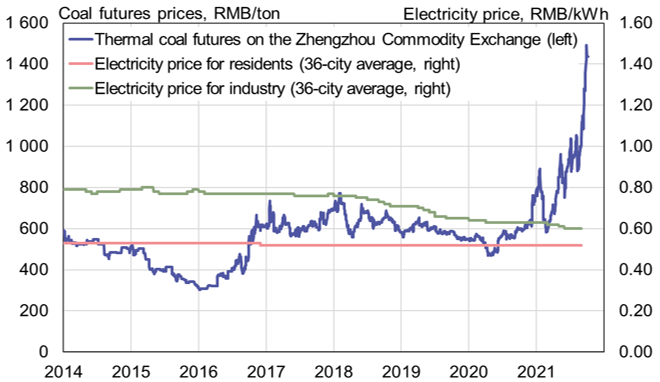