The government meeting last week produced a flurry of promises about measures to support the economy, but many still lacked details. Several of the proposals presented rely on increased bank lending. The People’s Bank of China now seems focused on dealing with hobbled economic growth. It has apparently pulled back from its earlier push to restrain the growth of indebtedness and lower risks to financial stability. The PBoC finds itself in a somewhat tricky situation, however, as application of its main monetary policy tools such as interest rate cuts risk yuan depreciation and capital flight. Keeping track of China’s monetary policy stance has become even more difficult, as central bank measures have become increasingly targeted, including such actions as issuing narrow bank specific guidance on lending amounts or guiding bank interest rates.

Among its targeted measures, the central bank said it would this year double the size of its quota for its small business relending facility. At the end of last year, the relending facility totalled 1.235 trillion yuan (170 billion euros). Under the programme, the PBoC provides financing to commercial banks to lend the money further under favourable terms. In addition, the PBoC committed to providing emergency loans to airlines totalling 150 billion yuan. The PBoC earlier announced a 200-billion-yuan lending facility for scientific innovation, a 100-billion-yuan quota for the coal industry and a 40-billion-yuan quota for elder care. Commercial banks grant loans to eligible firms at below-market rates. Afterwards the central bank reimburses the loans to the banks.

The PBoC and the China Banking and Insurance Regulatory Commission (CBIRC) last week also met with representatives of China’s largest commercial banks to encourage them to increase and speed up lending to various sectors, particularly smaller businesses. Suggestions included offering loan extensions to small firms, sole proprietorships, lorry drivers and households affected financially by covid restrictions. The government promised that banks will be supported to offer extensions. The government also said that policy banks will increase their lending by 800 billion yuan to support infrastructure projects. Earlier in May, the government already promised that large state-owned banks would increase their lending to SMEs this year by 1.6 trillion yuan. According to the government’s announcement, state funds would offer guarantees for such loans and cover any possible payment arrears or defaults.

The 5-year loan prime rate (LPR), the reference rate for housing loans, was lowered in May from 4.60 % to 4.45 %. The purpose of the rate cut was to stimulate demand for housing loans. The 1-year LPR rate (3.70 %), that is used as a reference for shorter-term loans, as well as other policy rates were kept unchanged. The level of reference rates alone, however, is not determinative of the rates at which banks ultimately lend. Earlier in May, the PBoC said commercial banks could grant housing loans to first-time buyers at 20 basis points below the 5-year LPR rate. Moreover, mortgage rates are set at the provincial level, and many cities have recently lowered their minimum interest rate requirements. In April, banks were guided to lower their deposit rates by ten basis points to prevent further erosion of their profitability.

Despite the government measures, demand for loans remains low. This could blunt the effects of the just-announced support measures. In April, the stock of bank loans saw its lowest growth since 2017. On-year growth in the loan stock slowed to 11 %. A large share of lending went to the corporate sector. The stock of loans granted to households shrank. Most household lending consists of housing loans, the demand for which has collapsed along with apartment sales. According to media reports, the increase in corporate borrowing did not necessarily always involve firms. To meet their corporate lending quotas, some banks just exchange bills with each other that are counted as corporate loans. 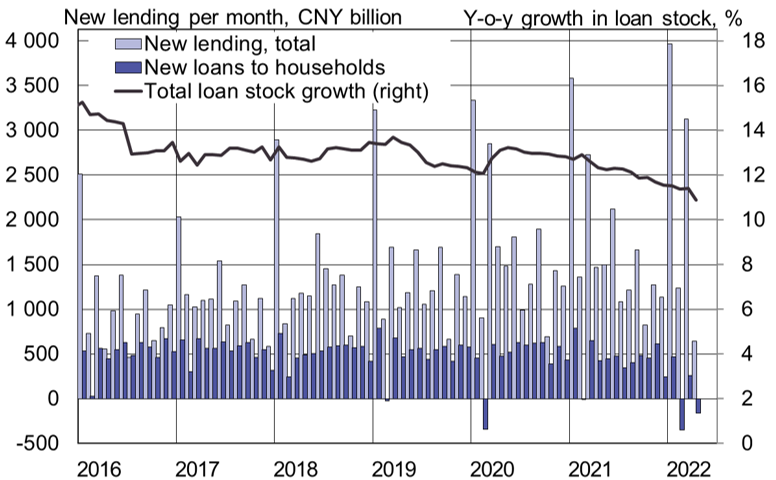