The number of new reported cases of covid-19 infections in China has declined significantly in recent weeks. Officials claim that daily new infections are now running at about the same level as at the start of February before the current omicron wave hit. With covid abating, pandemic restrictions have generally been eased around the country, including Shanghai. However, in a few areas, tighter restrictions have been implemented, including for the city of Langfang on the outskirts of Beijing. Covid lockdowns impacted the Chinese economy strongly in April (BOFIT Weekly 20/2022). The latest readings of the main purchasing manager indices show that companies continued to struggle in May.

China’s leadership has become increasingly concerned about the country’s faltering economy as this year’s GDP growth target of “around 5.5 %” could be unachievable. In an extraordinary teleconference with over 100,000 local decision-makers last week, premier Li Keqiang demanded they take action now to prevent the economy from contracting in the second quarter of this year. Participants also included top ministerial-level economic decision-makers.

The government proposed several new economic support measures last week, including larger tax refunds, extending the reductions in corporate social security contributions to the end of this year and extending reduction eligibility to new branches, tax cuts for automobile sales, increased subsidies to airlines, the tourism sector and farms. Spending on infrastructure projects will also be boosted. Provincial governments have been encouraged to launch projects as fast as possible and finance them by issuing this year’s entire quota of special purpose bonds by the end of June. In order to improve the access to financing of small and medium-sized enterprises (SMEs), the government presented various forms of support such as rent reduction and lower electricity rates. State-owned companies have been encouraged to pay their invoices from SMEs in a timely manner. While the list of proposed measures is long, it’s unclear which measures are truly new. By some estimates, the stimulus measures correspond to around 1.7 % of GDP.

Shanghai has proposed its own package of support measures that include accelerating real estate construction and incentives for apartment buyers. Firms in certain branches will be eligible for support if they promise to retain their workers or take on new workers who have either just graduated or have been unemployed for over three months. In addition, support will be offered to SMEs, as well as individuals for purchases of household appliances, equipment and cars.

It appears that the responsibility for implementing stimulus measures has yet again fallen upon the shoulders of local governments. While China’s rich metropolises such as Shanghai have money available for stimulus measures, many local governments are floundering in debt that could well limit their stimulus efforts. The central government has promised the equivalent of about 60 billion dollars in supplemental transfers to provinces to cover new stimulus spending. At the same time, all responsibility for covering the costs of covid testing and vaccination has been shifted to provinces. Many provinces earlier covered their costs of covid testing from employee health insurance funds. According to some Chinese estimates, the covid testing costed over 20 billion dollars in the first four months of this year. The finance ministry has demanded that local governments set aside sufficient funds to allow for extensive covid testing and vaccination also in the future. 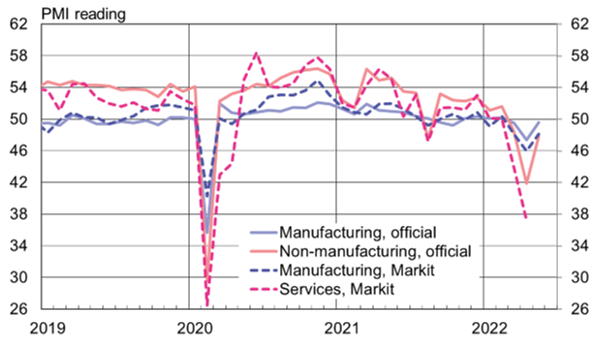