The ruble’s official exchange rate dropped sharply after Russia invaded Ukraine, falling as low as 120 rubles to the dollar at one point. Since then, the ruble has climbed back to pre-war levels. Indeed, the official ruble-dollar rate reached 57 rubles this week, its highest level since spring 2018.

The two major drivers of ruble appreciation in recent weeks have been Russia’s historically large current account surplus and the government’s imposition of emergency rules on the foreign exchange market. Preliminary figures released by the Central Bank of Russia show that the current account surplus hit an exceptionally large 37 billion dollars in April. Currency markets remain subject to several restrictions, even if some rules have been eased with improving market conditions. The restrictions are designed to artificially support the ruble’s exchange rate.

High global commodity prices support Russia’s export earnings. The average price of Urals blend crude oil in April was over 10 % higher than a year earlier, even if Russian crude currently sells at large discounts relative to other oil blends. Sanctions have only cooled Russian exports to a limited extent because they only apply to certain exports. Russia’s economic development ministry estimates that Western import bans, as well as restrictions on Russian shipping and road transport, affect about 20 % of Russia’s exports. At the same time, Russian imports have contracted dramatically. Imports face a double-whammy of depressed demand and lack of supply due to sanctions and decisions by large international firms to pull out of Russia on their own accord.

With the stabilisation of forex markets, Russia decided to relax the requirement on forex earnings conversion of export companies this week. The initial requirement implemented at end-February mandated that exporting firms convert 80 % of their forex earnings to rubles. The requirement is now lowered to 50 %. The move should ease appreciation pressure on the Russian currency. The demand of Russian firms for foreign currency, however, continues to be dampened by weak import development, capital controls and the ongoing risk that additional sanctions could be imposed.

While ruble appreciation lowers inflationary pressures in Russia by holding down import prices, this effect has been blunted by strong Western sanctions that have significantly restricted the supply of imports. Moreover, ruble appreciation reduces the amount of rubles the Russian government collects from dollar-denominated export taxes. 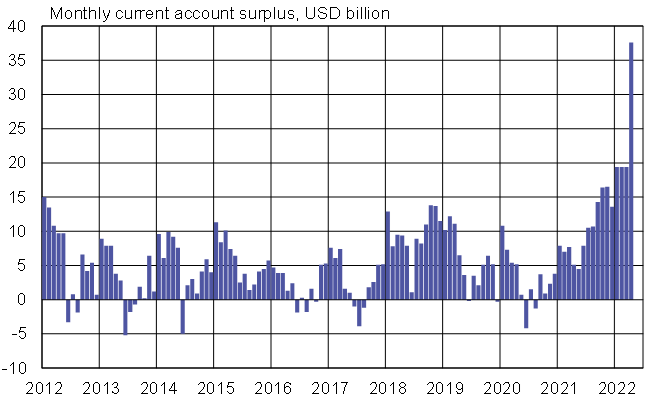