The value of goods exported from Finland to China in the January-March period reached 910 million euros, a 7 % increase from a year earlier. Finland imported goods worth nearly 1.9 billion euros from China in the first quarter, a 40 % increase from the first quarter of 2021. Finland’s trade deficit with China nearly doubled in 1Q22. China accounted for nearly 9 % of Finland’s total imports and about 5 % of total exports.

The value of goods exports fell on year in the two most important product categories (machinery, equipment & vehicles down by 23 % y-o-y, raw materials down by 6 %). These two categories combined account for 60 % of total Finnish exports to China. The value of chemical product exports grew by nearly 90 % (12 % share of exports) and manufactured goods 120 % (15 % share). The biggest import increases measured by value were in chemical products (up by 218 %), as well as fuels and lubricants (up by 128 %).

The value of goods trade has been boosted by higher prices. Export prices in Finland grew in the first quarter by 25 % y-o-y and import prices 27 %. In particular, prices soared for energy products and other raw materials. Export prices of industrial products were also up by 25 % on-year in the first quarter. Even if Finnish goods trade overall grew briskly in value terms (imports up by 35 % and exports up by 22 %), the volume of imports was up by just 6 % and the volume of exports contracted by 3 %.

The total value of EU exports to China, measured in euros, rose in the first quarter by just 2 % y-o-y, which was less than Finland’s exports to China. As export prices rose at the same time by 14 %, export volumes actually decreased by 12 %. In euro terms, total EU imports from China rose by about the same amount as Finland’s imports from China (up by 40 %). Import prices increased by 19 %, and thus the volume of imports rose by 15 %. 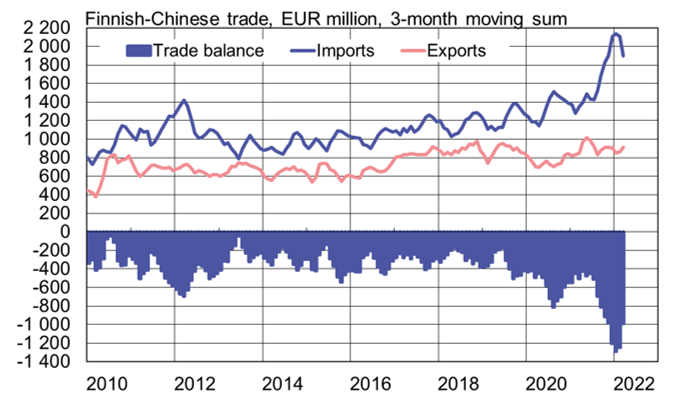