The impacts of Russia’s unprovoked attack on Ukraine are now beginning to emerge on a wider scale throughout the Russian economy. The scale of impacts varies from branch to branch. A preliminary assessment from Russia’s economic development ministry suggests that Russian GDP contracted by 3 % y-o-y in April.

The war has especially cut consumption as Russian purchasing power has been eroded by soaring prices. The volume of retail sales contracted by 10 % y-o-y in April. New car sales have evaporated in recent months. The Association of European Businesses (AEB) estimates that new car sales were down by 84 % y-o-y in May.

Manufacturing trends are mixed, and largely reflect component shortages and supply issues. Russia’s component importing has been debilitated not just by EU and US sanctions but also decisions on the part of many major international firms to pull out of Russia. Car manufacturing in Russia was down by over 60 % y-o-y in April. In addition, manufacturing of other transport vehicles and electrical devices contracted by nearly 10 %. A few branches, most notably pharmaceuticals, experienced strong growth in April.

Russia’s transport sector has suffered from the impacts of the war in Ukraine and sanctions. The total volume of transport fell by 6 % y-o-y in April. Air freight dropped by 85 % as many countries have closed their airspace to Russian aircraft. In addition, the EU and US have banned the export of aerospace products and services to Russia.

Russia’s economic trends are expected to weaken in coming months. The latest forecasts see Russian GDP contracting by 8–15 % this year. Many forecasts expect Russian GDP not to return to positive growth even next year. We assess Russia’s economic situation in greater depth in a new post this week on the BOFIT blog (in Finnish). 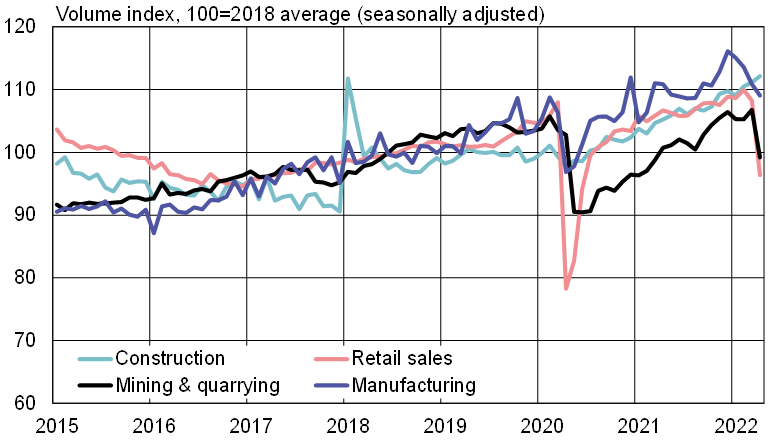