The Hong Kong statistics department reports that GDP contracted by 4 % y-o-y in the first three months of 2022. The decline was driven mainly by reduced private consumption due to a wave of covid infections that started early this year and subsequent lockdown measures to slow the spread of covid. The volume of exports also fell in the first quarter. The contraction in exports intensified towards the end of the first quarter. The value of exports fell by 9 % y-o-y in February and 17 % in March.

The Hong Kong economy is expected to recover in the second quarter. Covid infections have dropped significantly in Hong Kong and the government has included large spending increases in its 2022 budget. A return of travellers could also support growth. Foreign travellers have been allowed to visit Hong Kong since the start of May, and the mandatory hotel quarantine has been reduced to seven days. On the other hand, mainland China’s struggles with covid are reflected in the Hong Kong economy as it is by far the most important trade and business partner and main source of visitors. The special administrative region only expects GDP to grow this year by 1–2 %.

Hong Kong’s political leadership is changing, and its new chief executive vote was held on May 8. The special administrative region’s former security chief, John Lee, was the sole official candidate for the post. He was chosen by the election committee gaining 1,416 votes of 1,428 total votes cast. Lee’s term as the chief executive begins in July when Carrie Lam completes her five-year term. Beijing’s grip on Hong Kong is expected to tighten further under Lee.

China’s tightening grip on Hong Kong is also reflected in the just-released Reporters Without Borders 2022 World Press Freedom Index, in which Hong Kong fell to 148th place in the 180-country rankings. Hong Kong was still at 80th place just last year and at 34th place in 2010. China ranked 175th this year. 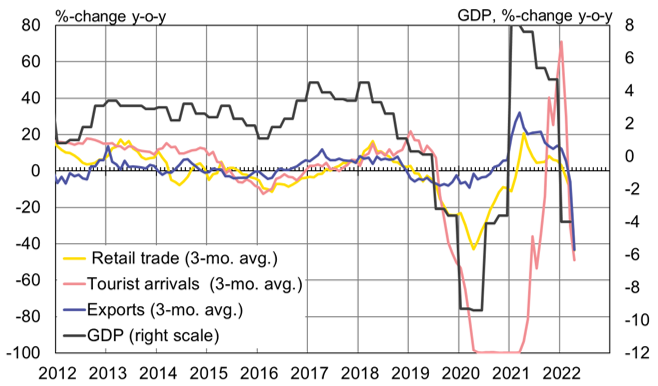