UNCTAD figures put the value of global foreign direct investment (FDI) in 2021 at just over 1.7 trillion dollars. It represented a 77 % increase from the previous year, which saw a historical decline in FDI due to the covid pandemic. In China’s case, however, inward FDI has increased throughout the pandemic period. Figures from China’s commerce ministry show that FDI inflows to China last year amounted to about 173 billion dollars, a 16 % increase from 2020. During the first four months of 2022, nearly 75 billion dollars in inward FDI flowed into China, a 26 % increase from a year earlier.

According to China’s commerce ministry, the value of outward FDI last year amounted to 114 billion dollars, a decline of 15 % from 2020. A recent study from Germany’s Mercator Institute for China Studies (Merics) found that Chinese FDI flows to Europe (EU-27 plus UK) rose by a third last year to around 10 billion euros. Most of the investment growth came from a single 3.7-billion-euro investment project in the Netherlands. The Chinese also actively invested in the UK, Germany and France. Chinese investment last year focused particularly on battery production for the automobile industry, health technology and IT. Shenzhen-based Mindray made a substantial investment in Finland last year with the 560-million-euro acquisition of the Turku biotech firm HyTest Invest Oy. In May 2022, National Silicon Industry, the Chinese owner of the Finnish silicon wafer-maker Okmetic, announced it was investing nearly 400 million euros in construction of a new chip production facility that will double Okmetic’s capacity.

Stricter capital controls and rules on foreign investment in China, along with stricter monitoring of Chinese investments, particularly in North America and Europe, have driven the general drop in Chinese outward FDI. The investment appetite of Chinese firms may also have been diminished by weakening economic conditions, ongoing struggles with the covid pandemic and draconian restrictions on travel. However, commerce ministry figures show that during the first three months of 2022 Chinese firms sent 27 billion dollars in FDI abroad, a 9 % increase from a year earlier. 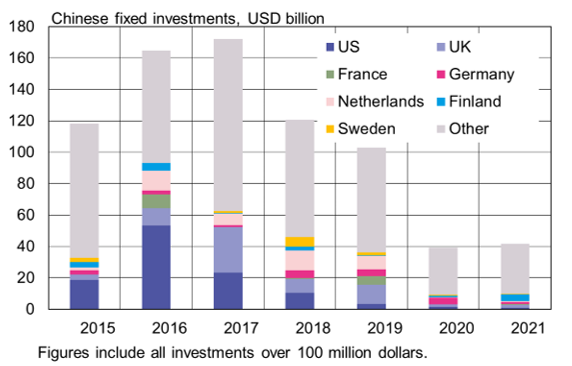