The economic disruption from Russia’s war on Ukraine and Western economic sanctions was reflected immediately in Russia’s financial markets. Over the subsequent weeks, signs of damage also began to appear in the real economy, but the development varied across branches.

The current shock wave started off with a brief spurt in consumer demand as shoppers stocked up for possible shortages and price rises. This is a familiar consumer behaviour in Russia when there is widespread anticipation of hard times ahead. As a result, March retail sales were still up by 2 % y-o-y, largely on foodstuff purchases. Inventories of many staple items such as vegetable oil and sugar were drawn down to exceptionally low levels. Most of the growth spike in non-food goods sales took place already in February, and sales were falling by March. March sales of new cars declined by 63 % y-o-y, approaching levels close to those experienced in the depths of the Covid Recession of spring 2020. An exception in the non-food category was online retail, which was 1,5 times higher in March than a year earlier. Online retail constituted 8 % of total retail sales.

The recent spike in consumption was one factor fuelling March inflation, with consumer prices climbing by 17 % y-o-y. High inflation has already begun to erode household purchasing power with average Russian real disposable household incomes shrinking since the start of this year. In the first quarter, real incomes declined by slightly over 1 % y-o-y. The average pension in March was 8 % smaller in real terms than a year earlier, even with the pension hike at the start of February. Weakening income trends are expected to reduce consumer demand in the months ahead.

Industrial production grew by 3 % y-o-y in March, but development within industry was diverging. While extractive industries still saw rising production in March, finance minister Anton Siluanov noted that Russian oil production could decline by 17 % this year if Western countries decide not to buy Russian crude. In 2020, during the Covid Recession, Russian oil production fell by 9 %. The level of manufacturing production has declined since the start of this year, and in March the fall accelerated. Manufacturing is suffering from a lack of imported components. Car manufacturing fell by nearly 50 % y-o-y in March.

Air transport is among the branches hardest hit by sanctions. The volume of air freight fell in March by over 80 % y-o-y. The transportation sector overall grew by 3.5 %.

The Russian economy is expected to weaken considerably in the months ahead. Recent forecasts see Russian GDP contracting by 8.5–15 % this year. Many forecasters expect Russia’s economic contraction to continue next year. Due to the massive uncertainty created by Russia’s attack on Ukraine, the risk of an even gloomier trend is possible. 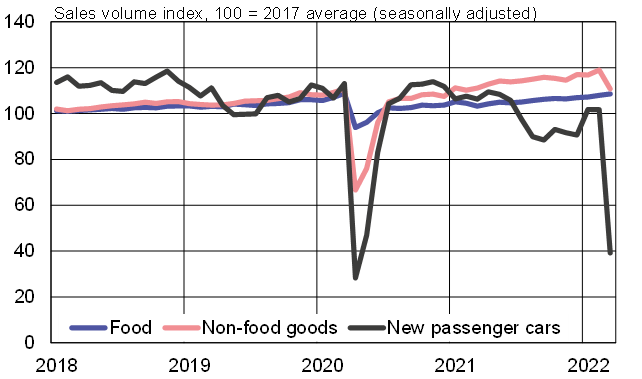