First-quarter apartment sales fell by 14 % y-o-y when measured by volume (floorspace) and by 23 % when measured by value (yuan). In addition, construction starts declined by 17 %, sales of land use rights fell by 42 % and apartment completions were down by 11 %. The situation in the real estate sector does not appear to be improving. In March, nearly all indicators for the sector were worse than in January or February. Prices of apartments in large and mid-sized cities continued to fall.

The financial status of many of China’s largest developers remains shaky. Developers and construction firms account for the largest share of Chinese offshore dollar-denominated bonds, the total return of which declined 19 % in the first quarter. So far this year, Chinese bond defaults are at around 6 billion dollars, and all originate from the real estate sector. Bloomberg notes that the troubled developers also have outstanding onshore yuan bonds worth about 70 billion yuan (over 10 billion dollars) maturing by the end of this year. The amount of bonds issued by developers has declined steadily since last summer, and the yield on developer-issued bonds has risen to historical highs.

Bloomberg lists 18 Chinese developers that have not managed to release their 2021 financial statements. For example, Sunac China, currently the country’s number-four developer, has been unable to publish even unaudited financial results. As stated by the firms, the biggest cause behind these auditing delays are covid restrictions, but the situation at some developers (including Sinic, Sunshine 100 and Fantasia) has been further complicated by the loss of key personnel.

The problems of the giant developer Evergrande are hardly over. Evergrande announced in March that it would release by the end of July a restructuring plan for repaying its foreign creditors, but at the same time it also struggles to deal with payments to domestic creditors. The latest settlement was reached at the end of last month, when investors granted a six-month extension on 574 million yuan (88 million dollars) in coupon payments on bonds issued by Evergrande’s subsidiary, Hengda Real Estate Group. Evergrande’s net sales last year fell by nearly 40 % y-o-y, and the group has yet to announce a sales target for this year. It has also not released any monthly sales figures since September 2021. Evergrande did announce last month, however, that 95 % of its projects were still ongoing.

Chinese officials are clearly concerned about the struggles of companies in the real estate sector. Zero-covid policies will continue to impact construction activity and demand for new housing in coming months. This year’s high GDP growth target seems increasingly unachievable without major stimulus. On April 18, the PBoC and financial supervision authority released a 23-point list of actions including to encourage banks to support local government infrastructure projects and high-quality building projects, as well as loan more money to developers. Officials encourage the tailoring of housing loan policies to local markets, as well as the need to grant breaks on loan payments to borrowers affected by covid restrictions.

Building starts and apartment sales have continued to decline this year 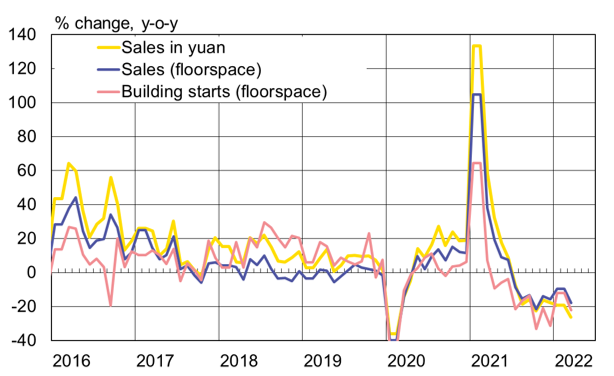