In recent months, a dip in food prices has helped China avoid a sharp spike in inflation, with the price swing led by pork prices. Swine production was rocked in 2019 and 2020 by the African swine fever virus, which ultimately caused pork prices to more than double and boosted inflation in the first half of 2020 to over 5 %. Pork prices only settled back to normal levels in autumn 2021. Because inflation is measured as the change in prices from 12 months previous, pork price inflation in the first quarter was still strongly negative (-40 %). Pork accounts for a large part of the Chinese food basket and China accounts for about half of all global swine production. It is both the world’s largest pork producer and pork consumer. In March, overall food prices were still 1.5 % cheaper than a year earlier.

As in other countries, energy prices have been rising in China, where its impact on inflation in recent months has been about one percentage point. In contrast, core inflation, which excludes the impacts of energy and food prices, has remained steady at around 1 % in recent months (1.1 % in March).

The rise in prices of energy and other commodities has been a major driver of producer price inflation, which has been high in recent months. Producer price inflation peaked in October 2021 at 13.5 %, but has steadily decreased since. The March rise in producer prices was 8.3 % y-o-y. The largest price rises were still in the energy sector, particularly prices for coal, crude oil and natural gas (all up by about 50 % in March). The 2022 Government Work Report presented at the National People’s Congress in early March stresses safeguarding the availability of energy through increasing domestic production, boosting national security reserves and stabilising price trends. 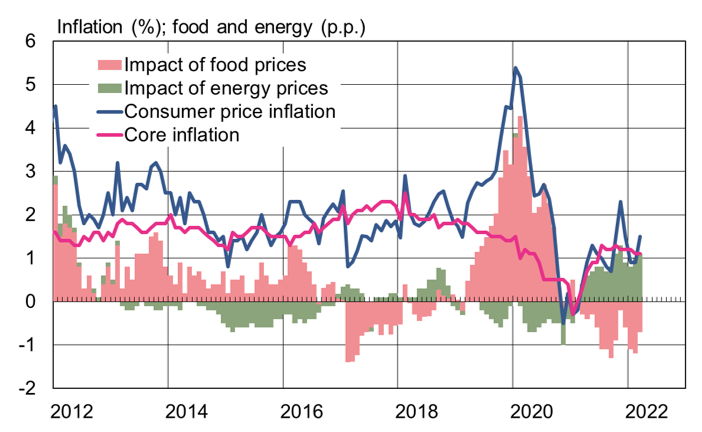