The People’s Bank of China announced on April 15 that it was lowering the reserve requirement ratio (RRR) of commercial banks by 25 basis points, effective as of April 25. In addition, rural banks and some smaller city banks will be entitled to an additional 25-basis-point reduction that seeks to support lending to small enterprises and farms. The central bank does not specify which banks are entitled to the extra cut. Neither change applies to banks already subject to the lowest-allowed 5 % reserve requirement. According to the PBoC, the weighted average reserve requirement for the banking sector will drop from 8.4 % to 8.1 %.

The move was widely anticipated. The PBoC said the reserve requirement cut was needed to support growth of the real economy and reduce financing costs. The overall impact, however, will likely be small as the RRR reduction is quite modest. The PBoC last cut the RRR in December by 50 basis points.

The government earlier announced other monetary policy measures to support the economy. Some additional information on these was contained in a list of 23 measures published by the PBoC and the State Administration of Foreign Exchange (SAFE) on Monday (Apr. 18). Some measures are meant to bring relief to firms and households dealing with the new covid wave and lockdowns, while others are intended to prop up the economy and different sectors more broadly. The more concrete measures include postponements in their housing loan payments for households affected by covid restrictions and interest support on bank lending to small firms (1 % of the value of net lending increase until summer 2023). In addition, the PBoC’s relending programme will be continued (and expanded if needed). The programme, which was used also in 2020 as part of the government’s covid stimulus response, is aimed on smaller banks to help them provide cheap loans mainly to small business in sectors hit by covid restrictions. Banks are also encouraged to increase their lending to gig workers.

While China’s slowing economy has put pressure on the central bank to further ease its monetary stance, it has kept both its policy rate and the LPR reference bank loan rate unchanged during February-April. The central bank has been relying on more targeted stimulus measures to support the economy. China’s accommodative monetary stance already runs counter to the tightening seen in most major economies. Further easing and rate cuts would likely fuel capital outflows and put depreciation pressure on the yuan. 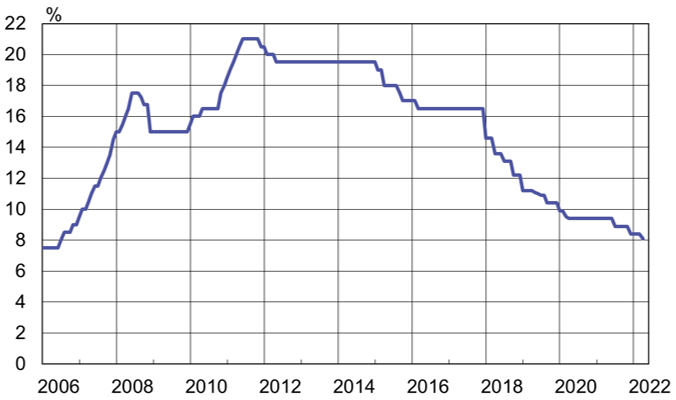