The ruble’s exchange rate crashed immediately after Russia invaded Ukraine. As Western sanctions restrict the access to central bank’s foreign currency reserves, the authorities have resorted to strict capital controls to support the ruble. In particular, a requirement to repatriate export earnings has boosted forex supply in Russian markets. Demand for foreign currency, however, has also been severely limited as forex purchases and the possibilities of taking forex out of the country are restricted (BOFIT Weekly 13/2022). Sanctions targeting Russian banks and Western export restrictions have further reduced euro and dollar demand within Russia.

As a result of these measures, the ruble’s exchange rate has bounced back to near its pre-invasion levels. Some media reports claim large Russian firms have had trouble finding buyers for their repatriated forex. The ruble’s appreciation has allowed the CBR to cautiously pull back on some of its forex guidance, although the relaxation has had little impact on the overall situation.

Capital controls and Western sanctions have complicated Russia’s ability to service its foreign debts (BOFIT Weekly 11/2022). A presidential decree issued on March 5 allows Russian entities to repay foreign currency loans taken from “unfriendly” sanctioning countries in rubles. While the finance ministry has since granted large firms temporary exemptions to make payments on interest and principal in forex, Western sanctions have impeded or prevented some of the payments from going through. For example, Russian Railways (RZD), steelmaker Severstal and potash fertiliser producer Uralkali have been unable to make timely coupon payments.

Capital controls and support measures announced by the central bank and the government have calmed Russia’s financial markets to the extent that the CBR was able to lower its key rate to 17 % as of last Monday (Apr. 11). While ruble appreciation has eased domestic inflation pressures, Western sanctions have cut imports and forced up domestic prices. March consumer prices were up by 16.7 % y-o-y and 7.6 % m-o-m. Price increases have been particularly hefty for fresh foods and some durable consumer goods. 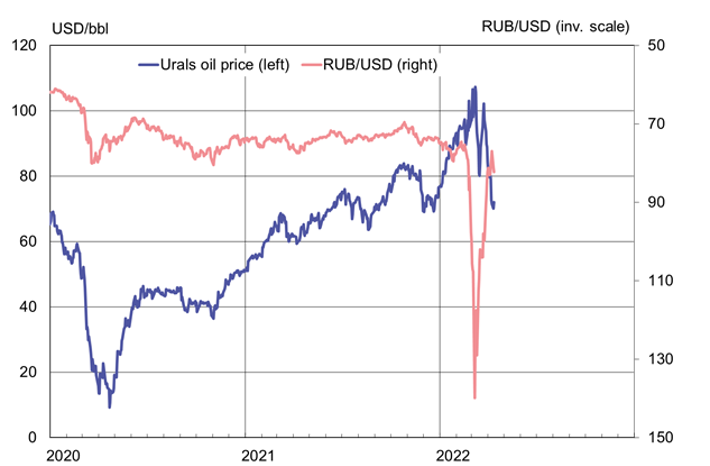