China launched a new round of stimulus measures this winter to boost economic growth. According to China’s National Bureau of Statistics, real GDP growth accelerated from 4.0 % in the fourth quarter of last year to 4.8 % in the first quarter of this year. The Bank of Finland’s own alternative calculations also suggest that Chinese GDP growth accelerated in the first quarter, even if the pace of growth was substantially lower than the official figures suggest.

Monthly data split first quarter growth into two parts. The economy grew rather briskly during January and February. In March, growth slowed rapidly as covid infections increased and cities around China tightened covid-restrictions to deal with spread of the virus. After growing at 5 % y-o-y in real terms in January and February, retail sales contracted in March by 6 %. Growth in industrial output slowed from 7.5 % in January and February to 5 % in March, and output of foreign firms even contracted. Growth in fixed investment also slowed in March. Labour market surveys showed that the unemployment rate rose to nearly 6 % in March, close to the level seen in early 2020. In the real estate sector, building starts and apartment sales each contracted by about 20 % y-o-y. The troubles of deeply indebted real estate developers struggling since last autumn will only increase.

The economic slowdown is likely to continue in April with spreading covid, lockdowns and the government’s “zero covid” suppression strategy. Many major institutional forecasters have lowered their forecasts for Chinese growth in recent weeks. Most now expect GDP growth to come in well below the official about 5.5 % target set for this year. The IMF’s World Economic Outlook, released this week, offers a significantly lowered forecast for global growth and sees China’s growth only reaching 4.4 % this year and 5.1 % next year. 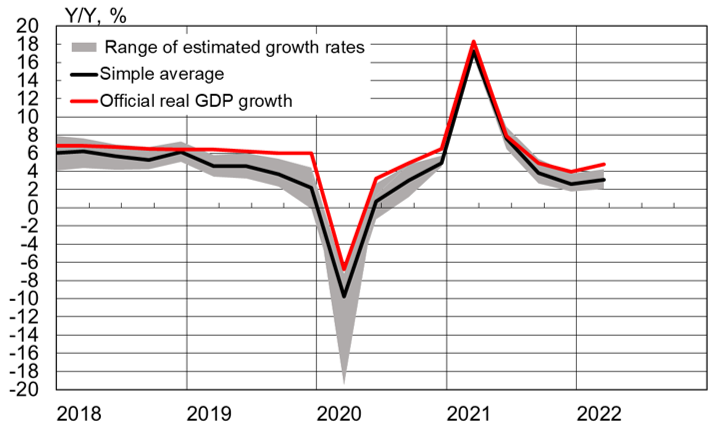