The first large-scale lockdown to curb the spread of covid-19 infections in Shanghai was introduced in late March. Lockdowns were initially applied separately to the eastern and western sides of the city. On Monday (Apr. 4), the lockdown was extended citywide. The official numbers for covid infections in China (including asymptomatic cases) have reached their highest levels ever. They are well above the figures of February 2020 when the pandemic began to spread outside the city of Wuhan. About 80 % of China’s reported covid cases in recent weeks have been found in Shanghai, which is testing all of its population multiple times.

Full or partial city lockdowns have not been confined to Shanghai and some level of restrictions are applied in most big cities in China. Shenzhen, for instance, went into lockdown for a week in March. The lockdowns and other covid restrictions were reflected in the March purchasing manager indices, that showed readings below the neutral level of 50. Markit’s Caixin services PMI plummeted from a 50.2 reading in February to 42.0 in March. The lockdown of Shanghai was not captured in the March PMI surveys, however. According to many observers, the current situation could impact the economy more than the lockdowns of early 2020 which focused on the city of Wuhan and surrounding Hubei province. Given the economic significance of Shanghai and its surroundings, several forecast institutions have lowered their 1Q and 2Q growth forecasts for China this year.

The Shanghai lockdowns are expected to further disrupt international supply chains. Lockdowns have already reduced road transport and changed cargo movements in areas surrounding the Port of Shanghai, the world’s largest bulk cargo and busiest container port in the world. Road freight has been diverted to trains or ships when possible, as well as some international freight to other Chinese harbours. The Port of Shanghai has so far managed to keep in operation. Indicators for port waiting times show no substantial delays in container handling, but some indicators suggest significant drop in freight volumes. Air freight to Shanghai has also sharply diminished. In coming weeks, the impacts of the covid lockdowns are assumed to be reflected in production and warehouse logistics figures, especially if the lockdowns continue.

The American Chamber of Commerce in Shanghai (AmCham Shanghai) released a flash survey of its member companies at the end of March. Of the 167 firms responding to the survey, 120 had operations in Shanghai. 99 % of respondents said that the latest covid surge had affected their businesses. 60 % of all respondents (and over 80 % respondents in manufacturing) said that covid lockdowns, lack of materials or labour shortages had forced them to cut production. Over half of surveyed firms (86 % in manufacturing) said that the situation had affected their supply chains. At the same time, over half expect negative impacts on their revenues this year. Nearly 80 % of firms expressed dissatisfaction with the long duration of Chinese covid quarantines and nearly 70 % with China’s strict restrictions on entry to the country. The EU Chamber of Commerce in China also made clear that China’s “zero covid” strategy is causing ever greater strains on firms and their logistics inside China and between China and the rest of the world. 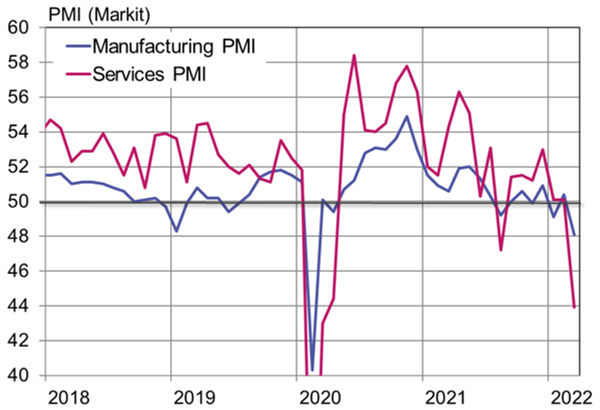