Russia’s unprovoked attack on Ukraine has plunged the Russian economy into uncertainty and recession. International community has imposed severe economic sanctions on Russia and Russia has responded with its own measures. The Russian economy is set to decline despite higher oil prices than in 2021. Markets expect energy prices to settle back to lower levels next year.

Our newest BOFIT Forecast for Russia 2022–2023 sees Russian economic activity declining to levels of a decade ago due to huge uncertainty, sanctions and Russia’s own restrictions. The long-term growth outlook has also weakened further. Russian imports will contract along with the economic decline, the ruble’s devaluation, foreign export bans and the voluntary cessation of exporting to Russia by numerous foreign firms. The anticipated 50 % drop in imports this year would push import figures down to levels last seen in the mid-2000s.

Private consumption should contract this year to levels of a decade ago as high inflation (likely at least 20 % p.a.) chews through real household incomes. The distress in companies will reduce employment and cut real wages. Fixed investment should contract to levels of roughly 15 years ago. Foreign firms operating in Russia will cut their capital investments to a minimum (the share of fully or partly foreign-owned firms has been 15 % of total fixed investment in Russia). Public investment is likely to increase, but its impact should be fairly limited. The reduction in inventories will sharply exacerbate the contractions in GDP and imports.

Growth of the global economy provides support for Russian exports. The EU is, however, moving ahead with plans to reduce its energy dependence on Russia. While there is some room to grow exports of Russian oil to other markets, gas exports are largely constrained by the pipeline infrastructure. Russia has also imposed its own export restrictions. High export prices and reduced imports should further increase the current account surplus, which already had reached nearly 7 % of GDP last year. The surplus will shrink next year as export prices are expected to fall and EU countries reduce their energy imports from Russia.

Public sector revenues could increase in real terms this year. Thanks to a weak ruble, strong earnings in the oil & gas sector from dollar-denominated production taxes and export duties (a fifth of government budget sector revenues last year) will boost government revenues. Crude oil and gas prices this year are higher than last year. Next year total budget revenues will decline in real terms as GDP, oil prices and the ruble’s exchange rate no longer support revenue growth and inflation remains high.

With the announced spending increases, the budget will show a large surplus this year, but government spending will decline in real terms. There is room to increase spending, as the current liquid assets of the National Welfare Fund and the upcoming transfer of last year’s excess budget revenues to the Fund together amount to nearly 15 % of GDP at the ruble’s current exchange rate. On the other hand, these assets are held in foreign currencies and considered part of Russia’s foreign currency reserves. Their use is restricted by EU and US sanctions directed at the Central Bank of Russia. The government has stated that if needed, these funds can be used by changing them to rubles through a special arrangement with the CBR.

The mainly downside risks to this forecast are exceptionally large due to the uncertainties flowing from e.g. war, sanctions, inflation and fixed investment. There is nevertheless some leeway for the government to boost public spending.

Russian GDP, imports and the main demand components are set to fall this year to levels not seen for several years 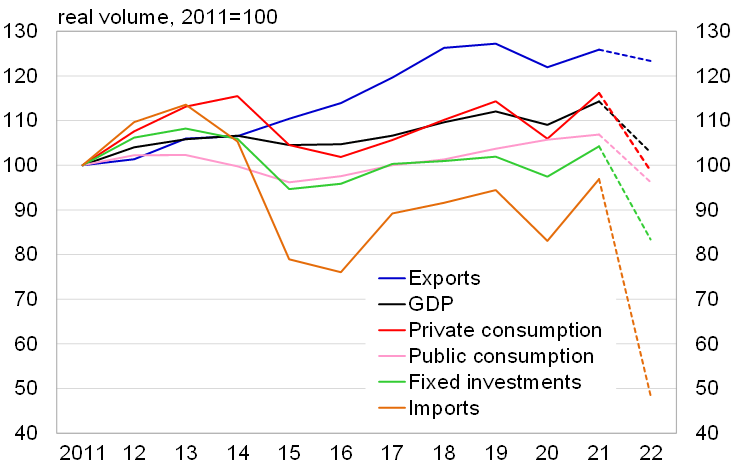