China’s crude oil consumption rose by 4 % last year. China has proven oil reserves of 26 billion barrels (1.5 % of global reserves), and its domestic production was sufficient to cover 28 % of the country’s oil consumption last year. China, the world’s largest oil importer since 2017, last year imported 510 million tons of crude oil (over 10 million barrels a day), a 7 % drop from 2020. China typically ramps up its oil imports when world oil prices are low, taking the opportunity to restock its national reserves. When prices rise on the world market, China accordingly reduces its import volumes. With crude oil, in particular, the international supply sources are highly diversified to prevent overdependence on a particular supplier. Saudi Arabia continues to maintain its status as China’s largest oil supplier. Last year, Saudi Arabia accounted for about 17 % of  China’s supply, Russia 15 % and Iraq 10 %. Due to US sanctions imposed on Iranian oil imports at the end of 2018, China’s Iranian oil imports have collapsed (according to official figures). It is a poorly kept secret, however, that many small refiners in China import Iranian oil, but declare as the country of origin a third country such as Oman, UAE or Malaysia. 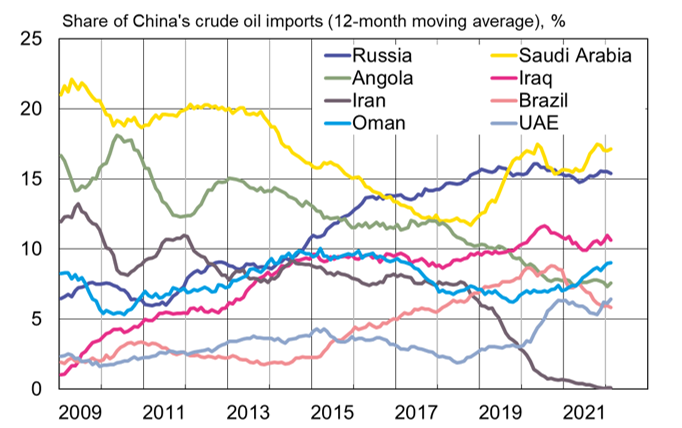