Over the past two weeks, the US, EU and UK have expanded their sanctions regime against Russia (for earlier sanctions, see BOFIT Weekly 9/2022). The new sanctions are again largely coordinated, even if there are differences in the details of some measures. The new sanctions include investment restrictions, bans on exports and imports, as well as targeted sanctions on specific firms and individuals. Many other countries, including Canada, Japan and Switzerland, have joined the sanctions at least partially. In addition, G7 countries have decided to strip Russia of it Most Favoured Nation (MFN) status in trade with G7 members. MFN status assures countries of equitable treatment when their products are imported to a G7 country. The loss of MFN status means that G7 members are e.g. free to place higher import tariffs on Russian products than on imports from other countries.

Under the latest round of sanctions, the EU and US have banned (with a few exceptions) new investment in Russia’s energy sector. The EU, US and UK also banned exports to Russia of various luxury goods such as fancy cars and expensive jewellery. The number of individuals and state-owned corporations subject to sanctions has also increased, and includes people from Russia’s business community, defence sector and politics (e.g. bans on doing business, freezing of assets and travel bans).

Western countries have also moved to restrict imports from Russia. The EU has banned imports of certain steel products valued at about $3.6 billion. US product bans include imports of e.g. Russian vodka, seafood and diamonds. The value of such imports amounts to about $1 billion. For its part, the UK has decided to impose a 35 % import tariff on many Russian import goods, including steel products, copper, aluminium, fertilisers and car tyres. The value of products subject to import tariffs has been about $1.2 billion. These measures together affect about $5.8 billion in Russian exports (1 % of Russia’s total exports of goods and services in 2021). 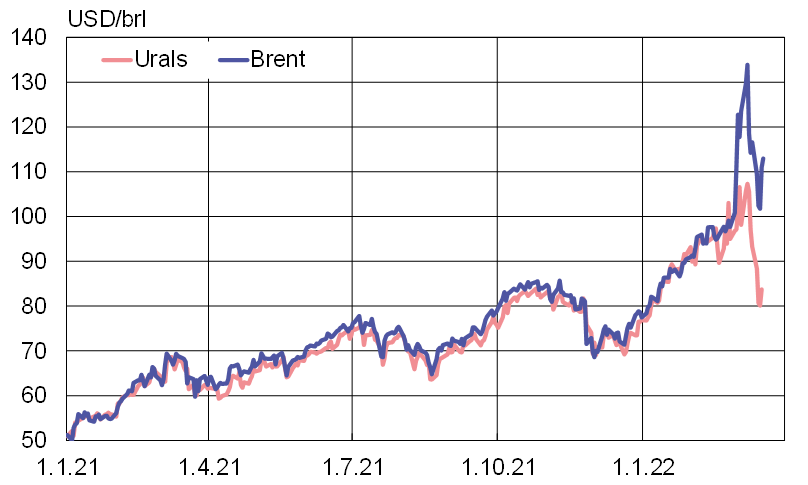