Because sanctions limit the Central Bank of Russia’s possibilities to use its foreign currency reserves to support the ruble, Russian export firms are now required to convert 80 % of their forex earnings to rubles. The requirement increases the supply of foreign currency on Moscow’s foreign currency exchange, especially due to the current rise in export commodity prices. Nevertheless, market trading activity has become thinner than ever and the market exchange rate of the ruble has fluctuated wildly.

In order to prevent capital flight, severe restrictions have been imposed on cross-border capital flows, and the ruble has ceased to be a fully convertible currency. There are restrictions on taking foreign currency out of Russia in the form of cash, and international bank transfers are extremely limited. All major business transactions with representatives of “unfriendly countries” must first be cleared with a committee established by the government. These include payments of interest and principal on corporate foreign debt.

Determining the market valuations of listed corporations or banks is not possible, as the Moscow Exchange has been closed for three weeks. The CBR announced this week that the trading halt would continue for at least the rest of this week. Part of the CBR’s reluctance to allow a reopening of the exchange is the fact that there are many potential sellers and few potential buyers.

The CBR has slightly modified its method for calculating the official ruble-dollar exchange rate. It is now based on trading prices for an entire day’s market session. Over the past three weeks, the ruble has lost almost 30 % of its value against the dollar. The ruble-euro exchange rate published by the CBR continues to be calculated from the official ruble-dollar rate and dollar-euro rate. Due to market conditions, The European Central Bank does not currently post a euro-ruble reference rate. 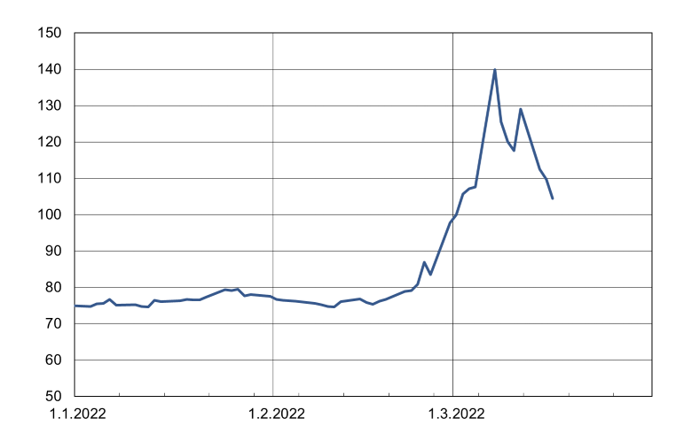