The new sanctions include restrictions on the financial sector, export bans and sanctions targeting specific individuals. The sanction schemes are largely coordinated by the EU and US, but individual Russian banks, for example, may get different treatment with respect to specific sanction measures. The purpose of wide-ranging sanctions is to increase the costs to Russia for staging an unprovoked attack on its neighbour and reduce the amount of funds available to finance war.

The financial sanctions of the EU and US effectively deny a significant part of the Russian banking sector of access to financing and payment traffic outside Russia. Sberbank and VTB, among Russia’s largest banks, already had limited access to financing from the EU and US. Now the US has, among other things, banned all dollar-based transactions with Sberbank and confiscated all of VTB’s assets in the US. The EU’s sanction measures led to the expulsion of seven Russian banks from the SWIFT banking communications system, but this measure does not concern e.g. Sberbank or Gazprombank. EU sanctions also prevent the access of privately-owned Alfa Bank for financing from EU countries. US sanctions extend to the privately held Moscow Credit Bank.

Significant sanctions have even been imposed on the central bank of Russia. Sanctions mean that the central bank has very limited access to Russia’s currency reserves invested abroad, even if this money is needed to prop up the ruble’s exchange rate. Supply of euro cash to Russia is also banned. Also financing of a number of Russia’s state-owned enterprises has been affected, including Russian Railways (RZD) and truck manufacturer Kamaz.

The EU and US have introduced a range of export bans that include dual-use products that can be used for civilian or military purposes, as well as a broad swath of high-tech products. The US earlier announced that semiconductors manufactured with American equipment or software made in the US, or products containing such semiconductors, can no longer be exported to Russia. The world’s top semiconductor producers, particularly those in Taiwan, have announced that they will comply fully with the sanctions regime. In addition, exports of aircraft and related components to Russia are now banned. Boeing and Airbus have already announced that they will no longer supply spare parts to Russia, making servicing of aircraft all but impossible. A huge share of planes in the Russian airline fleets are leased from abroad, particularly Ireland. Leasing firms may seek to move these planes from Russia.

Sanctioned individuals typically face being shunned from the business community and a freezing of their assets. Earlier EU and US sanctions already included punishments for top management in Russian firms, particularly oligarchs with business empires. That list has now been extended. The EU, US and UK took the unprecedented measure of imposing personal sanctions on Russia’s head of state, president Putin, as well as Russian foreign minister Sergey Lavrov. Any identifiable assets of these two held abroad have been frozen.

Sanctions on Belarus were increased after the country made itself available to Russia for staging the invasion of Ukraine from the north. It now appears that Belarussian troops are even participating in the invasion. As a result, several Belarussian banks have been added to the sanctions list. The EU’s latest import bans now cover about 70 % of Belarussian exports to the EU. Products added to the import sanctions list include wood, steel and iron. In addition, the earlier announced sanctions on imports of potassium carbonate (potash), along with fertilizers that contain potash, have been severely tightened. 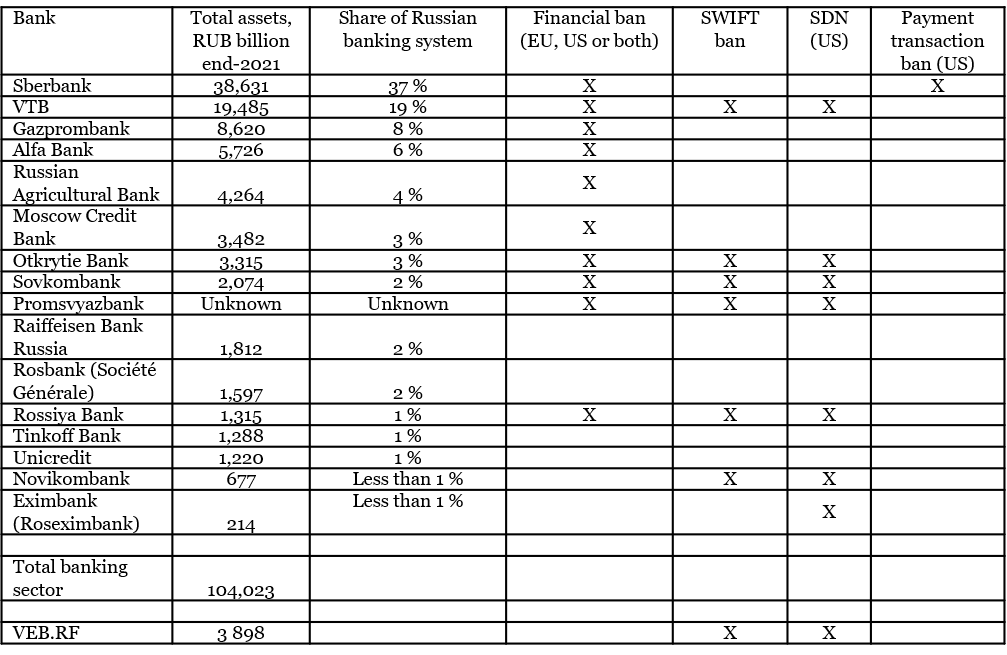 The Specially Designated Nationals and Blocked Persons List (SDN list) targets persons and institutions that US entities may not do business with or otherwise provide financing and technical support. The list is maintained by the US Department of the Treasury.

Please note! The table is compiled from various sources and it can contain errors. BOFIT cannot guarantee faultless, unaltered and updated information at all times, and must not be held liable for possible damage caused by use of the data.